ADAMS and JEFFERSON are no more; and we are assembled, fellow-citizens, the aged, the middle-aged, and the young, by the spontaneous impulse of all, under the authority of the municipal government, with the presence of the chief magistrate of the Commonwealth, and others its official representatives, the University, and the learned societies, to bear our part in these manifestations of respect and gratitude which pervade the whole land. ADAMS and 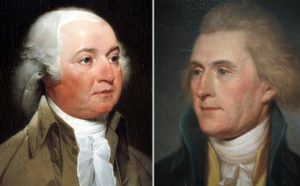 JEFFERSON are no more. On our fiftieth anniversary, the great day of national jubilee, in the very hour of public rejoicing, in the midst of echoing and reechoing voices of thanksgiving, while their own names were on all tongues, they took their flight together to the world of spirits.

If it be true that no one can safely be pronounced happy while he lives, if that event which terminates life can alone crown its honors and its glory, what felicity is here! The great epic of their lives, how happily concluded! Poetry itself has hardly terminated illustrious lives, and finished the career of earthly renown, by such a consummation. If we had the power, we could not wish to reverse this dispensation of the Divine Providence. The great objects of life were accomplished, the drama was ready to be closed. It has closed; our patriots have fallen; but so fallen, at such age, with such coincidence, on such a day, that we cannot rationally lament that the end has come, which we knew could not be long deferred.

Neither of these great men, fellow-citizens, could have died, at any time, without leaving an immense void in our American society. They have been so intimately, and over so long a time, blended with the history of the country, and especially so united, in our thoughts and recollections, with the events of the Revolution, that the death of either of them would have touched the chords of public sympathy. We should have felt that one great link, connecting us with former times, was broken; that we had lost something more, as it were, of the presence of the Revolution itself, and of the act of independence, and were driven on, by another great remove from the days of our country’s early distinction, to meet posterity and to mix with the future. Like the mariner, whom the currents of the ocean and the winds carry along until he sees the stars which have directed his course and lighted his pathless way descend one by one, beneath the rising horizon, we should have felt that the stream of time had borne us onward till another great luminary, whose light had cheered us and whose guidance we had followed, had sunk away from our sight.

But the concurrence of their death on the anniversary of Independence has naturally awakened stronger emotions. Both had been President, both had lived to great age, both were early patriots, and both were distinguished and ever honored by their immediate agency in the act of independence. It cannot but seem striking and extraordinary, that these two should live to see the fiftieth year from the date of that act/ that they should complete that year/ and that then, on the day which had fast linked for ever their own fame with their country’s glory, the heavens should open to receive them both at once. As their lives themselves were the gifts of Providence, who is not willing to recognize in their happy termination, as well as in their long continuance, proofs that our country and its benefactors are objects of His care?