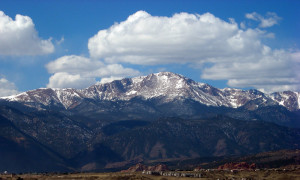 Thomas Jefferson had commissioned the Lewis and Clark Expedition two years previously to explore the northern regions of the Louisiana Purchase, and now he wanted a second military party to explore the more southern Great Plains and the Rocky Mountains.

The expedition first headed up the Missouri to the Osage River, where Pike returned the hostages to their home villages and parleyed with the natives. Striking northwest, the group made for the Pawnee territory on the Republican River. On September 29, Pike met with the Pawnee tribal council and announced the protectorship of the United States over the territory, instructing the Pawnee to remove a Spanish flag from their village and to fly the Stars and Stripes instead.

The expeditionary force turned south and struck out across the prairie for the Arkansas River. After reaching it on October 14, the party split in two. One group, led by Lieutenant James Wilkinson, traveled downstream along the length of the Arkansas to its mouth and back up the Mississippi, safely returning to St. Louis.

Pike led the other, larger group to the west, toward the headwaters of the Arkansas. The plains were windswept and desolate and seemingly endless, but after a month, on November 15, Pike spied a distant snowcapped mountain which he called “Grand Peak”. Pike and his men tried to climb the peak, which now bears his name, hoping to survey the surrounding area, but the party was not equipped to climb the 14,000-foot summit with winter closing in.

Pike pressed on up the Arkansas, and on December 7 the party reached Royal Gorge canyon at the southern end of the front range of the Rocky Mountains. Heading north, the party found the South Fork of the Platte River and, following it upstream, came to what they thought were the headwaters of the Red. Turning back downstream, they returned to the point at which they had left the Arkansas and realized that they had just executed a large loop, wasting weeks of precious travel time.

Hungry, cold, and exhausted, the party headed south. Several men dropped behind from fatigue, but Pike pressed on. By January 30, he and ten men camped at the Rio Grande in southern Colorado. They built a fort and attempted to collect their comrades who were strewn behind across miles of wilderness.

On February 26, Spanish soldiers from nearby Santa Fe discovered the fort and arrested Pike and his men as spies. The Spanish marched them south to Chihuahua. The Mexican Governor complained of the foray, but treated Pike as a gentleman and released him and his officers, although he did hold several of the enlisted soldiers in jail for years. After filing a formal protest with the United States Government, the Spanish military escorted Pike north through Texas.

On July 1, 1807, Zebulon Pike crossed over to Natchitoches on the Louisiana border, and his western odyssey came to an end.