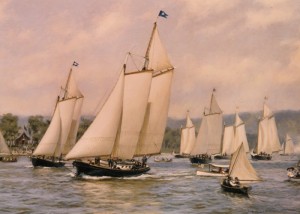 Six schooners and three sloops assembled in the upper bay of New York harbor, and a holiday atmosphere overtook the city as the offices and counting houses let out early. The men of large business, brokers, and jobbers requisitioned every craft that could float, from skiffs to large excursion steamers, and thousands of spectators, all New York who could get there, went out in boats or picnicked along the shore to view the spectacle. It was a novel sporting event, promising cutthroat competition and a parade of sails, and wagers up to $500 were routinely traded as the yachts neared the line.

The boats were handicapped based on their weight. Calculating their tonnage by custom house measurement, 45 seconds per ton was allowed at the start. The schooner yachts were built wide with perpendicular or slightly convex stems, square sterns, short standing bowsprits, and no fore topmasts. Balloon canvas of all sorts was unknown and no one ever had to lay out to muzzle the jib topsail because there was not any. The spinnaker did not yet exist.

In a brisk breeze, with close competition on both the upwind tacks and the broad reaches, the biggest boat,  Cygnet,  won in 5 hours 23 minutes and 15 seconds, with Sybil coming in second, two minutes behind, and Gimcrack another five minutes behind the Sybil.

The prize was as good a cup as could be purchased with the entrance money, which was twenty-five dollars for each yacht. Commodore J C Stevens, “a mighty good fellow and a most hospitable host,” was delighted by the success of the regatta, even though he came in third, and the annual gathering of racing yachts continues to this day.