On the morning of July 21, 1861, a throng of sightseers, including Senators and Congressmen, rode out from Washington to Centreville, Virginia, to watch the Union Army rout the upstart rebels and march on to Richmond.

“They came in all manner of ways, some in stylish carriages, others in city hacks, and still others in buggies, on horseback and even on foot. 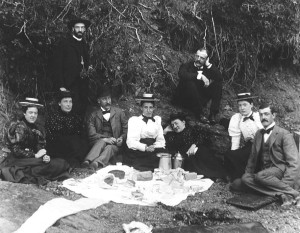 Apparently everything in the shape of vehicles in and around Washington had been pressed into service for the occasion. It was Sunday and everybody seemed to have taken a general holiday; that is all the male population, for I saw none of the other sex there, except a few huckster women who had driven out in carts loaded with pies and other edibles. All manner of people were represented in this crowd, from the most grave and noble senators to hotel waiters.”

“On the hill beside me there was a crowd of civilians on horseback, and in all sorts of vehicles, with a few of the fairer, if not gentler sex …. The spectators were all excited, and a lady with an opera glass who was near me was quite beside herself when an unusually heavy discharge roused the current of her blood —‘That is splendid, Oh my! Is not that first rate? I guess we will be in Richmond tomorrow.’ ” 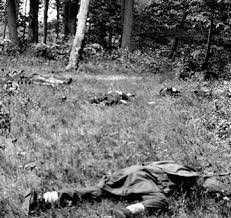 Near the battlefield, a group of senators were eating lunch. They heard a loud noise and looked around to see the road filled with soldiers, horses, and wagons–all headed in the wrong direction. “Turn back, turn back, we’re whipped,” Union soldiers cried as they ran past the spectators.

Startled, Michigan Senator Zachariah Chandler tried to block the road to stop the retreat. Senator Ben Wade of Ohio, sensing a disastrous defeat, picked up a discarded rifle and threatened to shoot any soldier who ran. While Senator Henry Wilson distributed sandwiches, a Confederate shell destroyed his buggy, forcing him to escape on a stray mule. Iowa Senator James Grimes barely avoided capture and vowed never to go near another battlefield.

One notable exception was Congressman Ely who strayed too close to the battle and became a prisoner of the 8th South Carolina Infantry. Alone among all the politicians clamoring, “On to Richmond!” Ely was successful; he spent the next five months residing at Libby Prison.