We stood at last on that Gate-of-Heaven summit….and gazed in wordless rapture over the far expanse of mountain ranges and the sea-like sweep of plain.” 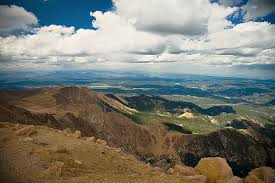 Katie Bates was on the crest of the wave. She was thirty-three years old, and headed out west on a sort of a honeymoon. After graduating from Wellesley College, and after teaching briefly at Natick High School and then at Dana Hall, she was back at Wellesley as a professor of English, and had fallen head over heels into a “Boston Marriage” with Katharine Coman, professor of economics and history.

Both women were enthusiastic about the West (Coman would write on the Economic Beginnings of the Far West), and were excited when they were invited to teach a summer session at Colorado College. The two Katharines boarded a train and headed west. They passed through Massachusetts and New York, stopped briefly at Niagara Falls, then it was off to Chicago for stopover at the Coman family home and a tour of the World’s Columbian Exposition. From Chicago, they boarded another train, bound for their summer classes, passing fields of wheat as they traveled west through Kansas and on to Colorado Springs.

She returned to her room in the Antler’s Hotel that night, and started to write the poem that eventually became our national hymn, America, the Beautiful. That evening she remarked to her friends that countries such as England had failed because, while they may have been “great”, they had not been “good” and that “unless we are willing to crown our greatness with goodness, and our bounty with brotherhood, our beloved America may go the same way.”