In the summer of 1973, the Senate Select Committee wanted to know what President Nixon knew about the Watergate break-ins, and when he knew it.

They couldn’t interrogate the President directly, but they could interrogate the White House staff. They finally got around to Alexander Butterfield, his deputy chief of staff who managed the president’s West Wing schedule. Butterfield was invited to an interview on Friday, July 13. Before he went, he had a heart-to-heart with his wife, Charlotte; “I didn’t want to lie,” Butterfield recalled, “I never entertained the thought of lying.” But he knew a big secret.

He and Charlotte agreed that Butterfield would volunteer nothing; he’d only answer a direct question. “If the investigators asked me an indirect or fuzzy question,” Butterfield said, “I was justified in giving an indirect, fuzzy answer.” After a few hours of questions, Butterfield felt he was in the clear. Then the inquiries turned to the president’s Dictaphone, which Nixon used to dictate letters for his secretary, Rosemary Woods, to type the next day.

“Were there ever any recording devices other than the Dictaphone system you mentioned?”

Butterfield froze. He hesitated, took a deep breath and answered, “Yes.” He knew that a voice-activated taping system recorded conversations in the Oval Office because he had ordered the Secret Service to install it. Only a handful of other people knew of its existence.

Within a week Nixon had the taping system disconnected, and claiming executive privilege refused to turn over the recordings to the Watergate committee or the special prosecutor, Archibald Cox. Cox issued a subpoena for the tapes as evidence. The President refused to comply but on October 19, Nixon offered a compromise: Senator John C. Stennis would review the tapes for the special prosecutor’s office. Since Stennis was famously hard-of-hearing, Cox refused the compromise.

The White House continued to stonewall. They released edited transcripts of some tapes. A new Special Prosecutor, Leon Jaworski, was appointed. In April 1974, Jaworski obtained a subpoena ordering Nixon to release tapes related to specific meetings between the President and persons under indictment. Nixon turned over edited transcripts of forty-three conversations, but his attorney James D. St. Clair, requested Judge John Sirica of the U.S. District Court to quash the subpoena, stating “The President wants me to argue that he is as powerful a monarch as Louis XIV, only four years at a time, and is not subject to the processes of any court in the land except the court of impeachment.”

Sirica denied the motion and ordered the President to turn the tapes over by May 31. Both Nixon and Jaworski appealed directly to the Supreme Court which heard arguments on July 8. 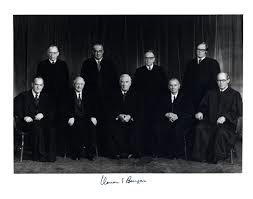 Less than three weeks later. Chief Justice Burger delivered the decision. After ruling that Jaworski had proven a “sufficient likelihood that each of the tapes contains conversations relevant to the offenses charged in the indictment,” the Court went to the main issue of executive privilege.

The Supreme Court of the United States of America unanimously rejected Nixon’s claim to an “absolute, unqualified Presidential privilege of immunity from judicial process under all circumstances.”