“When I die, my epitaph, or whatever you call those signs on gravestones, is going to read: ‘I joked about every prominent man of my time, but I never met a man I dident like.’” 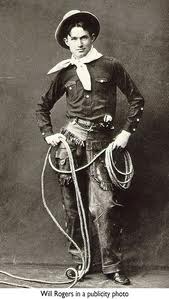 Will Rogers was born on the Dog Iron Ranch in the Indian Territory before it became Oklahoma. He was nine-sixteenths Cherokee; his ancestors hadn’t come over on the Mayflower – they “met the boat.” He dropped out of school in the tenth grade to study roping and the cowboy arts, then he went on to vaudeville and Hollywood. He began to write a weekly column, “Slipping the Lariat Over”, and by the middle of the nineteen thirties he became our Cowboy Philosopher. Americans loved him because he could always be relied on to speak the truth:

“There are three kinds of men. The ones that learn by readin’. The few who learn by observation. The rest of them have to pee on the electric fence for themselves.”

“The short memories of the American voters is what keeps our politicians in office.”

“Being a hero is about the shortest-lived profession on earth.”

“A difference of opinion is what makes horse racing and missionaries.”

“We can’t all be heroes because somebody has to sit on the curb and clap as they go by.”

“Even if you are on the right track, you’ll get run over if you just sit there.”

“Never miss a good chance to shut up.”

“Lead your life so you wouldn’t be ashamed to sell the family parrot to the town gossip. ”

“A fool and his money are soon elected.”

“We are all here for a spell, get all the good laughs you can.”

“Always drink upstream from the herd.”

“If there are no dogs in Heaven, then when I die I want to go where they went.”