What a “bully” idea! A round the world cruise of 16 modern steel battleships would demonstrate to the entire world that Teddy Roosevelt’s America was now a global power – willing and ready to show the flag in any ocean, anywhere. The hulls would be painted white – the Navy’s peacetime color scheme, and the armada would be known as “The Great White Fleet”. 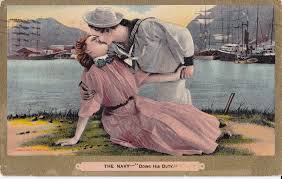 The fleet sailed from Hampton Roads south to Brazil, through the Straits of Magellan to the Pacific, north to Chile, Peru, and Mexico and on to San Francisco, then across the Pacific to Hawaii and New Zealand, and now they neared Australia. Aboard the flagship Connecticut, Rear Adm. Evans looked out with pride upon the majestic fleet under his command. His ships “were ready at the drop of a hat for a feast, a frolic or a fight”.

Before daylight on August 20th sight-seers steamed out as far as 30 miles off shore to meet the fleet.  By the time the ships reached the headlands of Botany Bay, they enjoyed a huge escort of excursion vessels. From Coogee Bay to Port Jackson harbor, thousands upon thousands of people peered out from the bluffs, the high cliffs, and headlands and cheered across the waters. As soon as the USS Connecticut turned into Port Jackson, the bands struck up “The Star Spangled Banner”.

Half a million people turned out for the arrival – a public holiday was declared and a week-long “Fleet Week” celebration followed. Perhaps the folks Down Under didn’t need the protection of the Crown and the Royal Navy if they had friends like this from the Land of the Free and the Home of the Brave. The Official Landing was followed by a review at Centennial Park, parades, luncheons, dinners, balls, concerts, theatre parties, boxing, football and baseball matches, a gymkhana,a tug-of-war, fireworks, and a regatta.

For the sailors every moment of every day was filled with so much celebration that it was difficult to keep up. One tar fell asleep on the railroad tracks and got run over by a train. Another sailor fell asleep on a bench in one of Sydney’s parks. Not wishing to be disturbed, he posted a sign above his head which read: “Yes, I am delighted with the Australian people. “Yes, I think your park is the finest in the world.
“I am very tired and would like to go to sleep.”

After a week the fleet sailed to Melbourne for more celebration. The city fathers sponsored a giant official dinner for the sailors, but only a handful showed up – the others all found girls who were eager to personally show them the town.

On September 5th. 1908, fifteen of the battleships of the Great White Fleet sailed out of port. The USS Kansas stayed behind to try to collect the 154 sailors from throughout the fleet who had decided not to return to their ships, but to stay behind with the girls they had met on shore.