The day began beautiful and clear as Doctors Will and Charlie Mayo visited their patients in Rochester, Minnesota, but as the day wore on it became stiflingly hot and humid and an oppressive haze covered the city. At 6 PM the brothers drove their buggy to a slaughterhouse on the north side of town thinking they might procure a sheep’s head on which they could practice eye surgery.

As the buggy made its way, the brothers kept an eye on the sky. Upon arrival at the slaughterhouse, they found the workers leaving early, and they were warned take cover. Fleecy clouds scudded rapidly across the sky and the dark mass in the west took on an evil greenish cast. Rain came down in sheets, the heavens blazed with lightning and a massive funnel cloud bore down with a terrifying roar. 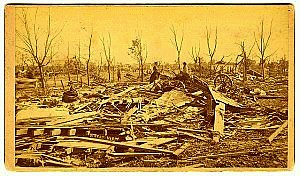 Just as the Mayo brothers took shelter in a blacksmith’s shop its roof was torn away – the roof of the Chicago & Northwestern depot was torn off and the roundhouse demolished – the railroad bridge was blown into the river and the Broadway Bridge was destroyed – Cole’s stone mill was blown in. Eight rail cars were overturned and two carloads of flour dumped in the race – the spire of the Lutheran church was blown off – Gilman’s factory was demolished – the Rochester Harvester Works were ruined – Whitten’s warehouse was destroyed – the County Courthouse and the High School were wrecked. The water had been sucked right out from Cascade Creek, leaving fish beached on its banks. Livestock and buggies and debris were scattered and strewn everywhere.

That night Mayor Whitten organized volunteers to begin rescue efforts. Townspeople pulled the dead from flattened homes and rushed the injured to Rommel Hall, a dance hall transformed into an emergency hospital.

The two Mayo brothers, their brother-in-law Dr. David Berkman, and their father Dr. William Worrall Mayo took charge of the trauma ward. The senior Dr. Mayo quickly realized that the task of caring for patients around the clock would require more helpers. He called on Mother Alfred and the Sisters of Saint Francis, teachers at the Catholic school, to tend to the patients. The Sisters responded and nursed the patients until the temporary hospital closed.

After the storm Mother Alfred recognized that the growing city of Rochester needed a full time hospital. She proposed that the Mayos could be the resident physicians and the Sisters of St. Francis would provide nursing care. The Mayos were not sure – they thought the town was too small to support such an ambitious venture, but Mother Alfred was determined. The Sisters proceeded to raise all of the money needed to begin.

Before the storm, Rochester was best known as the hub of the wheat market in southeastern Minnesota. Now it is world-famous as the home of the Mayo Clinic.