September 1, 1921: The Battle of Blair Mountain

Sid Hatfield was Sheriff in Mingo County, West Virginia. He was also one of “those” Hatfields and didn’t think much of how the coal mine operators ran their company towns.

Albert and Lee Felts were the brothers of the Baldwin-Felts Detective Agency’s founder Thomas Felts. They carried out the wishes of the coal mine owners. 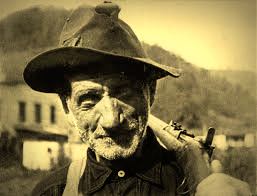 When Albert and Lee arrived in Matewan, WV in May 1920 to evict striking miner families from their company houses, Sheriff Hatfield stood with the town mayor to block the evictions. After a tense moment, gunfire erupted in the streets of the company town. The mayor and three miners, and seven detectives, including Albert and Lee Felts, were killed.

‘The Matewan Massacre’ hit the national news. With a Hatfield involved, the story of feuding mountaineers was fodder for the tabloids. Locally, the miners admired Sid Hatfield for standing up for their rights and the following year the United Mine Workers gained strength in Mingo County, while the coal operators got their backs up. Each side bolstered their arsenals and miners began waging guerilla warfare while the mines posted armed guards and replaced striking miners with scabs.

On the first of August in 1921, Sid Hatfield was summoned to the McDowell County Courthouse for allegedly dynamiting a coal tipple. As Hatfield, his friend Ed Chambers, and their wives walked up the courthouse steps a group of Baldwin-Felts agents gunned them down.

Miners poured out of the mountains to take up arms. In the recent years of labor strife they had accumulated a large store of weaponry including machine guns and high-powered rifles. Miners began gathering near the state capitol of Charleston. By August 24th they had grown to roughly 10,000 men and with red bandanas tied around their necks they started to march on Mingo County to end martial law, free imprisoned miners, and organize the county.

However, the coal operators’ private army stood directly in the “red necked” miners’ way. Don Chafin, the Sheriff of Logan County, had set up a defensive line along ten miles of ridges around Blair Mountain, with machine gun nests dug in overlooking the hollows that rose to the gaps.

By August 28th, skirmishes between the miners and the coal operators’ army began to break out around Blair Mountain. On the morning of the 31st, the miners started an all-out assault on the mountain. Intense fighting broke out at Blair Gap, Crooked Creek Gap and Beech Creek Gap, with the miners attempting numerous assaults, but machine gunfire held them back. On September 1st, 500 miners assaulted Craddock Fork, a hollow that runs to Crooked Creek Gap. A three hour firefight ensued until one of the machine guns jammed, and the miners rushed and broke through the lines.
Before sunrise on the 2nd of September the miners were less than a mile from the town of Logan. The coal operators hired private planes which dropped homemade bleach bombs and gas and explosive bombs left over from World War I.

As the battle escalated President Warren Harding threatened to send in federal troops and Martin MB-1 bombers. On the 2nd of September, federal troops began moving into position behind both armies while General Billy Mitchell ordered the bombers sent in for aerial surveillance. By the fifth of September, the whole warfront was quiet.

During the five days of fighting, it is estimated that over one million rounds were fired. The true number of casualties remains unknown because the miners carried away all their casualties and kept silence regarding their dead and wounded.

In the aftermath of the battle the coal operators and the state of West Virginia felt they could deal a deathblow to the union. 985 miners were indicted for murder, conspiracy to commit murder, accessory to murder, and treason against the State of West Virginia. A lengthy trial drained the UMW’s funds and by the end of the1920s only 512 union miners remained in West Virginia.

In April 2008, Blair Mountain, the site of the largest armed conflict in the U.S, since the Civil War, was chosen as a protected site on the National Register of Historic Places. This decision was contested by the state of West Virginia, allied with two of the largest coal producers — Arch Coal, Inc., and Massey Energy Company, which held permits to strip-mine the upper slopes and ridge of Blair Mountain.

In October 2012, a federal judge ruled against a coalition of preservation groups, and in favor of the coal companies that want to mine the historic site.