Ernest Hemingway was at home in Key West when the storm hit:
“This is the way a storm comes. On Saturday evening at Key West, having finished working, you go out to the porch to have a drink and read the evening paper. The first thing you see in the paper is a storm warning. You know that work is off until it is past and you are angry and upset because you were going well.

“You go down to the boat and wrap the lines with canvas where they will chafe when the surge starts, and believe that she has a good chance to 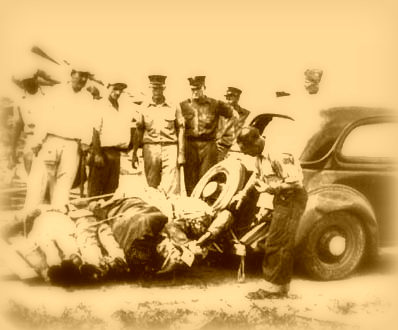 ride it out if it comes from any direction but the northwest where the opening of the sub-basin is; provided no other boat smashes into you and sinks you. There is a booze boat seized by the Coast Guard tied next to you and you notice her stern lines are only tied to ringbolts in the stern, and you start belly-aching about that.

“The wind is bad and you have to crouch over to make headway against it. You figure if we get the hurricane from there you will lose the boat and you never will have enough money to get another. You feel like hell.

“But a little after two o’clock it backs into the west and by the law of circular storms you know the storm has passed over the Keys above us. Now the boat is well-sheltered by the sea wall and the breakwater and at five o’clock the glass having been steady for an hour, you get back to the house. As you make your way in without a light you find a tree is down across the walk and a strange empty look in the front yard shows the big old sappodillo tree is down too. You turn in.”

The eye of the hurricane storm passed and Papa was able to ride out the storm. To the east however, on the low lying unsheltered islands of the Florida Keys, a thousand World War I veterans had been building a road as a part of the Public Works for Veterans program.

They never had a chance. When he got there, this is what Hemingway saw:

“The railroad embankment was gone and the men who had cowered behind it and finally, when the water came, clung to the rails, were all gone with it. You could find them face down and face up in the mangroves. The biggest bunch of the dead were in the tangled, always green but now brown, mangroves behind the tanks cars and the water towers. They hung on there, in shelter, until the wind and the rising water carried them away. . .”

“Camp Five was where eight survived out of 187, but we only find sixty-seven of those plus two more along the fill makes sixty-nine. But all the rest are in the mangroves. It doesn’t take a bird dog to locate them. On the other hand, there are no buzzards. Absolutely no buzzards. How’s that? Would you believe it? The wind killed all the buzzards and all the big winged birds like pelicans too. You can find them jn the grass that’s washed along the fill. Hey, there’s another one. He’s got low shoes, put him down, man, looks about sixty, low shoes, copper-riveted overalls, blue percale shirt without collar, storm jacket, by Jesus that’s the thing to wear, nothing in his pockets. Turn him over. Face tumefied beyond recognition. Hell he don’t look like a veteran. He’s too old. He’s got grey hair. You’ll have grey hair yourself this time next week. And across his back there was a great big blister as wide as his back and all ready to burst where his storm jacket had slipped down. Turn him over again. Sure he’s a veteran. I know him. What’s he got low shoes on for then? Maybe he made some money shooting craps and bought them. You don’t know that guy. You can’t tell him now. I know him, he hasn’t got any thumb. That’s how I know him. The land crabs ate his thumb. You think you know everybody. Well you waited a long time to get sick, brother. Sixty-seven of them and you got sick at the sixty-eighth.

“And so you walk the fill, where there is any fill and now it’s calm and clear and blue and almost the way it is when the millionaires come down in the winter except for the sand-flies, the mosquitoes and the smell of the dead that always smell the same in all countries that you go to—and now they smell like that in your own country. Or is it just that dead soldiers smell the same no matter what their nationality or who sends them to die?

“He will die too, himself, perhaps even without a hurricane warning, but maybe it will be an easy death, that’s the best you get, so that you do not have to hang onto something until you can’t hang on, until your fingers won’t hold on, and it is dark. And the wind makes a noise like a locomotive passing, with a shriek on top of that, because the wind has a scream exactly as it has in books, and when the fill goes and the high wall of water rolls you over and over and then, whatever it is, you get it and we find you, now of no importance, stinking in the mangroves.”