When Vitus Bering’s explorers crossed from Siberia to Alaska, the Spanish took notice. The Spanish had long considered California their territory, but if the Russians started to take possession from the North. . .     Nervous about the Russian game of global politik, King Charles III of Spain approved plans for a chain of pueblos to settle the coast, missions to convert the heathens, and presidios to provide protection.

In August 1769, a surveying expedition passed through the Los Angeles basin and found a broad river valley, framed by a line of hills, which had “all the requisites for a large settlement.” The Spaniards got shook up by three 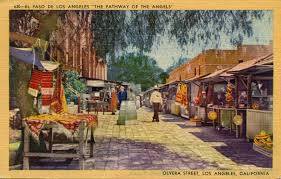 earthquakes, but they enjoyed meeting and greeting the local natives under the shade of the giant, 400-year-old sycamore tree.

Missionary Juan Crespí described the scene:
“…After traveling about a league and a half through a pass between low hills we entered a very spacious valley, well grown with cottonwoods and alders, among which ran a beautiful river from a north-northwest, and then, doubling the point of a steep hill, it went on afterward to the south… … It was a good sized, full flowing river, about seven yards wide, with very good water, pure and fresh….The plain where the river runs is very extensive. It has good land for planting all kinds of grain and seeds, and the most suitable site for a mission. The beds are very well lined with large trees, sycamores, willows, cottonwoods, and very large live oaks.”
“As soon as we arrived, about eight heathen from a good village came to visit us: they live in this delightful place among the trees on the river”.

A presidio was built in San Diego in 1769, the San Gabriel Arcángel Mission built in 1771, and in 1777 the first pueblo was founded in San Jose. The Spanish recruited experienced farmers from the dry province of Sonora who knew how to use irrigation during the dry summers as well as skilled artisans who could keep the settlement supplied with tools.

On September 4th, an annual march from the San Gabriel Mission to Olvera Street celebrates the origins of the City of the Angels, Los Angeles, which grew from a small multiethnic pueblo into one of the greatest and most culturally diverse cities in the world.