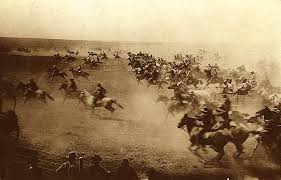 At one minute before twelve o’clock my brother and I, noticing that the soldier out in front was squinting upward along his rifle barrel and intent on the coming signal, slipped out fifty feet in front of the line, along the railroad embankment… Viewed from out in front the waiting line was a breath-taking sight. We had seen it only from within the crowd or from the rear. The back of the line was ragged, incoherent; the front was even, smooth, solid… I thought I had sensed the immensity of the spectacle, but that one moment out in front gave me the unmatched thrill of an impending race with six thousand starters in sight.

First in the line was a solid bank of horses; some had riders, some were hitched to gigs, buckboards, carts, and wagons, but to the eye there were only the two miles of tossing heads, shiny chests, and restless front legs of horses.

While we stood, numb with looking, the rifles snapped and the line broke with a huge, crackling roar. That one thundering moment of horseflesh by the mile quivering in its first leap forward was a gift of the gods, and its like will never come again. The next instant we were in a crash of vehicles whizzing past us like a calamity…

A little before midnight, we woke to a distant clatter of hoofs, shouting, and shooting. ‘Number – section – township – range -. Keep off and get off!’ Then crack! crack! went the rifles, after each call, from the pretty country we had been admiring at sundown…

After a hearty breakfast we pumped up our sorry tires and packed up to start south for the town sites. Ever since daybreak boomers had been straggling northward, bound for Kansas and all points east.

One young fellow who stopped for a moment while we were eating breakfast was a fair sample of this crowd… He had staked a claim in our nice little valley, along with a half dozen others on the same tract; and of course, as in such cases all over the Strip, nobody under heaven could know who had arrived first. But for him the delicate question had been settled by the gay horsemen in the pitch darkness of the night before. By the time they were through with him he felt assured that he must have arrived about a week late.

‘I wouldn’t live here next to such neighbors, anyway,’ he told us with considerable heat. At this safe distance and in the daylight his feelings had turned to indignation, but he was still trembling a little.”