Peg Entwistle had a tough childhood. When she was just a child back in Wales, Her mother died. Her father brought her to New York, but he was soon run over by a car on Park Avenue.

Orphaned in the big city, Peg took up acting. By the time she turned 17 she was working Theater Guild productions on Broadway. The platinum blonde quickly got roles …with big name actors and rising stars, including Ethel Barrymore, and began to make her own name as an actress. “I want to be exactly like Peg Entwistle,” Bette Davis reportedly said after witnessing Peg’s performance in Ibsen’s The Wild Duck. 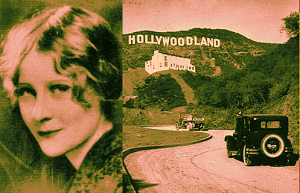 Her personal life was complicated. She married a man 10 years her senior, but then she found out he had been married before and had a small son. Peg divorced him, but with her kind heart she helped him stay out of jail by paying the back alimony he owed his ex-wife.
In 1931, Peg appeared in Getting Married co-starring Dorothy Gish and in 1932 she co-starred with Laurette Taylor in Alice-Sit-By-The-Fire, but sometimes she had a hard time finding work. In 1932 she moved to Los Angeles, like many another young starlet, to find fame in the movies. She found stage work alongside a young Humphrey Bogart in The Mad Hopes, but the play closed after a brief run.

RKO signed her for the role of Hazel in the murder mystery Thirteen Women, starring Myrna Loy and Irene Dunne. The movie was a hokey, B-grade melodrama with a strange plot: “A group of former school friends start getting horoscopes from a fortune teller who is working under an evil influence.” Peg was extremely hopeful about her big screen debut. But when Thirteen Women came out, the critics wrote savage reviews, and most of Peg’s performance wound up on the cutting room floor.

Her studio options with RKO were dropped, and depression set in. On September 18, 1932, after a night of drinking, Peg told her Uncle Harold that she was going to walk up Beachwood Drive to meet some friends at the local drugstore.

Peg scratched and clawed her way up the rocky slope of Mt. Lee to the base of the “Hollywood” sign. She removed her black and tan silk coat, folded it neatly and placed it alongside her purse at the base of the 50 foot high ladder which led up the letter “H”.

The starlet then climbed up the ladder – losing one of her new shoes along the way – and, after peering out over the twinkling lights of the City of the Angels, she performed a perfect swan dive onto the rocky ground.

Peg Entwistle was 24 years old. Her note read: “I am afraid I am a coward. I am sorry for everything. If I had done this a long time ago, it would have saved a lot of pain.”

Peg Entwistle is not well remembered in Hollywood today, but hikers and rangers in Griffith Park do still report sightings from time to time of a very attractive, blond woman, dressed in 1930’s era clothing, who seems very sad, and who abruptly vanishes when approached. They also often remark on the pungent smell of gardenia, Peg’s trademark perfume, which lingers in the air even after the mysterious woman has disappeared.