As Franklin Roosevelt opened his campaign for his fourth term as president, he was under the usual attacks from his rivals. He kicked off his campaign with a major speech at the Teamsters Union dinner in Washington DC. Knowing that the speech was being broadcast on all the major radio networks, Roosevelt went on the attack against his opponents in Congress and rebutted a litany of their many attacks on him. Late in the speech, Roosevelt addressed Republican charges that he had accidentally left Fala behind on an Aleutian Island while on tour there and had sent a. Navy destroyer to retrieve him at an exorbitant cost to the taxpayers: 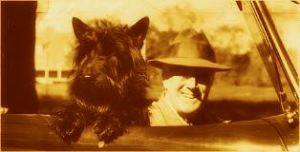 “These Republican leaders have not been content with attacks on me, or my wife, or on my sons. No, not content with that, they now include my little dog, Fala. Well, of course, I don’t resent attacks, and my family doesn’t resent attacks, but Fala does resent them. You know, Fala is Scotch, and being a Scottie, as soon as he learned that the Republican fiction writers in Congress and out had concocted a story that I had left him behind on the Aleutian Islands and had sent a destroyer back to find him – at a cost to the taxpayers of two or three, or eight or twenty million dollars- his Scotch soul was furious. He has not been the same dog since. I am accustomed to hearing malicious falsehoods about myself – such as that old, worm-eaten chestnut that I have represented myself as indispensable. But I think I have a right to resent, to object to libelous statements about my dog.”

The audience went wild, laughing and cheering and calling for more, and the laughter carried into living rooms and kitchens throughout the country, where people were listening to the speech on their radios. The Fala bit was so funny, one reporter observed, that ‘even the stoniest of Republican faces cracked a smile.’ 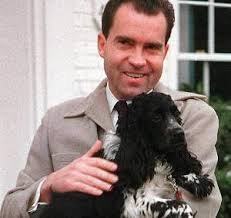 Exactly eight years later, on September 23, 1952, when the Republican vice presidential candidate, California Senator Richard Nixon, found himself under attack from the Democrats for his personal finances, he reached deeply into the same bag of political rhetorical tricks, to rescue his floundering candidacy:

“Well, that’s about it. That’s what we have. And that’s what we owe. It isn’t very much. But Pat and I have the satisfaction that every dime that we’ve got is honestly ours. I should say this, that Pat doesn’t have a mink coat. But she does have a respectable Republican cloth coat, and I always tell her she’d look good in anything.

One other thing I probably should tell you, because if I don’t they’ll probably be saying this about me, too. We did get something, a gift, after the election. A man down in Texas heard Pat on the radio mention the fact that our two youngsters would like to have a dog. And believe it or not, the day before we left on this campaign trip we got a message from Union Station in Baltimore, saying they had a package for us. We went down to get it. You know what it was? It was a little cocker spaniel dog in a crate that he’d sent all the way from Texas, black and white, spotted. And our little girl Tricia, the six year old, named it “Checkers.” And you know, the kids, like all kids, love the dog, and I just want to say this, right now, that regardless of what they say about it, we’re gonna keep it.”