Rev. Joseph Glover was a great supporter of the Massachusetts Bay Colony. After seventeen ships had brought a thousand emigrants to Boston in 1630, Glover thought a printing press would be a vital improvement for the colony. He raised money, purchased a press, two trays of type, ink and reams of paper and found a pressman, Stephen Daye, to accompany him as he and his family sailed to New England. 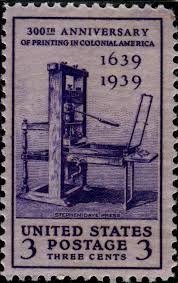 Unfortunately, Reverend Glover died at sea, but the press and his widow and children and Stephen Daye made it ashore. Widow Glover had the press set up in Cambridge, where a college had just been started. The move to Cambridge was a good one on Elizabeth Glover’s part, because she soon became the wife of Henry Dunster, the first president of the College that would soon be named another young clergyman, John Harvard.

Stephen Daye was supposedly a good printer, but the evidence shows otherwise. In the first year he printed a broadsheet, The Freeman’s Oath and an almanack, and in 1640 printed the colony’s first book, the Bay Psalm Book. He received 300 acres of land from the colony for his work, which he promptly mortgaged for a cow, a calf, and a heifer. A close inspection of the book shows that, while the type was new and unworn, Daye didn’t really know what he was doing. Impressions were uneven, there were many typographical errors, commas and periods were used interchangeably, syllables were broken incorrectly.

By 1643, his fourth year on the job, Daye landed in jail (about average for a pressman). By 1648, he had been sacked from his job by President Dunster, who administered his wife’s affairs, and replaced by another pressman, Samuel Green. Daye hung around Cambridge, sued Dunster for one hundred pounds, and went to court to try to collect his real estate grant.

By 1656, there were two presses in Cambridge. These were the old “wine press” apparatuses; paper had to be brought in from England, and production was very slow. A lot of material was sent back to England to be printed if time allowed. By this time, however, the colonists had begun to teach young Indians to read. They wished to translate the Bible into the Indian languages, and it made sense to print where the Indian students could proofread the copy.

Green had printed 500 copies of the New Testament when Marmaduke Johnson arrived from London in 1660. Marmaduke was a pretty good pressman, although he had some run-in’s with the law in his past. His wife was back in England, so when he got to Cambridge he started hitting pretty hard on Samuel Green’s daughter; by 1662 a restraining order had to be put out on him. Nevertheless, Marmaduke got to work with Green printing the Bible which John Eliot was translating into Algonquin using a phonetic English alphabet. They also got help from a young Nipmunk Indian they named James the Printer.

The Bible consisted of about 150 press sheets, folded into signatures and then gathered, sewn, and bound into books. The pressrun was one thousand copies and it took a week to print each form, so, with Marmaduke’s periodic absences, it took more than two years to print. The printers had two trays of type, which was enough to set a form, but after each form was printed, the type had to be distributed back into the cases, so that it would be available for the next form. The New Testament came out in 1661. There were a few delays along the way due to Marmaduke’s “ issues”, and then the Old Testament was completed in 1663.

In 1714, the press became the property of Timothy Green who took it to New London, Connecticut. Over the years, the press moved several times through Connecticut and New Hampshire. It eventually printed the first Vermont newspaper, The Vermont Gazette, in Westminster in 1781. George Hough purchased the old press and moved it to Windsor in 1783 where he published The Vermont Journal and the Universal Advertiser.

After over 150 years of continuous work, the old Daye Press finally retired from daily work, but it can still be seen – at the Vermont Historical Society in Montpelier, Vermont.