By the time school had reopened in the fall of 1960, nearly everybody had a TV. Across the country, American families moved into the living room every evening to watch Dragnet, I Love Lucy, Leave it to Beaver, Perry Mason, or the Ed Sullivan Show. 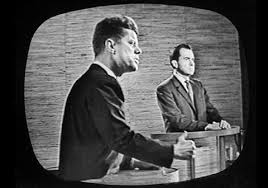 On the last Monday in September however, the Andy Griffith show as pre-empted, as 28 million homes tuned in for the first televised Presidential debate. John F Kennedy, the handsome young Senator from Massachusetts, and Richard Nixon, the seasoned Vice President from California, had each given many speeches and interviews and appeared on shows like Meet the Press and Face the Nation, but for the first time since the Lincoln – Douglas debates two presidential candidates agreed to debate in person, and this time the debates would be broadcast on both radio and television.

Kennedy spent the morning before the debate prepping with his aides “like young men at college cramming for an exam.” He took a nap in the afternoon, after which JFK met with his “brain trust” again, sitting on his bed with fact cards, reading each while firing questions at his aides, and then flinging the card onto the floor of the hotel room.

Nixon spent the day alone, with barely a visitor or phone call. He had a bit of a fever and was still nursing his knee which he had bashed on a car door while campaigning in North Carolina, and had then developed an infection which landed him in the hospital for two weeks.

At the TV studio, Don Hewitt, the debate producer asked both candidates if they wanted makeup; both declined. Kennedy was well-tanned from his open-air campaign stops in California. Nixon looked a bit pale, and as he had confided to Walter Cronkite before the debate, “I can shave within 30 seconds before I go on television and still have a beard.”

Instead of professional make up, Nixon’s aides gave him a quick coat of Lazy Shave, a drugstore pancake makeup he had used in the past to mask his five o’clock shadow. When he started sweating under the hot studio lights, the powder seemed to melt off his face, giving way to beads of perspiration. It didn’t help that Nixon’s light gray suit seemed to fade into the backdrop of the set and matched his ashen skin tone.

As the debate began, Kennedy stared directly into the camera as he answered each question. Nixon, on the other hand, addressed the questioning reporters who were standing away from the camera, shifting his gaze from side to side.

The next day, the New York Times reported that Senator Kennedy “maintained an expression of gravity suitable for a candidate for the highest office in the land,” while the vice president “dabbed frequently at the perspiration that beaded out on his chin.”

Nixon said “he thought he lost a couple of pounds and it might have shown up on his face,” but a physician traveling with the campaign said that there was nothing wrong with the vice president. Herbert Klein, Nixon’s press secretary attributed Nixon’s haggard look to the TV lights or the makeup he wore.

Reacting to the vice president’s on-air appearance, Chicago mayor Richard J. Daley reportedly said, “My God, they’ve embalmed him before he even died.” The Chicago Daily News interviewed an agent for the Makeup Artists and Hair Stylists Union who asserted that a makeup artist deliberately sabotaged Nixon – “a Republican couldn’t have done that job.” Even Eisenhower chimed in about the “trials of television makeup” and that it’s too bad that “Dick has such a heavy beard.”

Nixon’s running mate, Henry Cabot Lodge, had watched the debate with dismay: “That son of a bitch just lost the election.”