Christmas won’t be Christmas without any presents,” grumbled Jo, lying on the rug.

“It’s so dreadful to be poor!” sighed Meg, looking down at her old dress.… 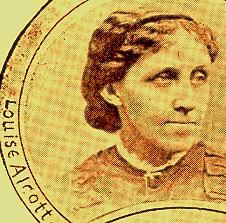 “I don’t think it’s fair for some girls to have plenty of pretty things, and other girls nothing at all,” added little Amy, with an injured sniff.

“We’ve got Father and Mother, and each other,” said Beth contentedly from her corner…

Louisa May Alcott did not grow up in a typical American family. Her father, Bronson Alcott, who was as odd as two left feet, believed that only children, so recently arrived from the celestial realm, possessed a purity that could redeem humankind. “Look not into the world,” he wrote, “for the image of the Father. There it is dimmed, disfigured. But look into the radiant face of childhood ere earth hath left its traces upon it, and be blessed—nay, saved!”

Bronson Alcott founded several schools dedicated to drawing the divine essence out of his pupils, which drew lavish praise from Ralph Waldo Emerson, but Bronson never could reach other parents’ children soon enough to perfect his theories. He turned to his own home to cultivate infant perfection in his daughters.

Carefully excluding all harmful influences, Bronson exhorted his daughters to resist every selfish impulse and to indulge every creative one. The youngest girl, May, was allowed to draw on the walls of her room, even while four-year-old Louisa was required to give up the last slice of her birthday cake when an unexpected guest arrived at the party.

When Louisa was eleven, the Alcotts moved to a commune called Fruitlands, whose members swore off all animal products, coffee and tea, and any commodity generated by slavery. In theory, all its members enjoyed an equal claim on one another’s loyalties and affections, but the sexual politics proved particularly tough on a young marriage. Fruitlands foundered in less than a year.

During her teenage years in Concord, Louisa freely browsed through Emerson’s library, where she discovered Goethe, Milton, Schiller, and Carlyle. Henry David Thoreau played his flute for her and took her on nature walks through the woods. Nathaniel Hawthorne lived next door. Through these Concord neighbors Louisa’s eyes were opened to nature, literature, and life. Yet every illuminated day ended with a trudge back home to a coarse supper of bread and apples, and to a father habitually out of work, and where all were as “poor as rats.”

Her father hoped to teach the Alcott girls the unimportance of worldly wealth, but Louisa discovered by experience that metaphysical essays and meditations on the Oversoul earned little. She started to write, to make her own way in the world. By 1868, her work had appeared in the Atlantic Monthly, her Civil War memoir, Hospital Sketches, had been recognized for its merit, and her novel, Moods, had been reviewed by the young Henry James. Louisa’s father’s editor thought she might write a smart, lively novel for girls. She had told him she would try, but her experience told her that writing for juveniles “doesn’t pay as well as rubbish.” Moreover, Louisa had “never liked girls” or known many, other than her sisters Anna, Lizzie and May. She saw only the faintest possibility that the “queer plays and experiences” that they had shared would interest a popular audience.

Nevertheless, she set to work on an autobiographical novel which she initially called “The Pathetic Family,” and sarcastically assured her publisher that she would make her characters “as ordinary as possible.”

It took Louisa 12 weeks to complete Little Women. Reaching into her imagination she created a warm and supportive family providing the emotional security she never knew as a child, and when the novel became an instant best-seller, she suddenly realized the respect and financial security she never dreamed she would know.