Hon A B Lincoln…
Dear Sir

My father has just home from the fair and brought home your picture and Mr. Hamlin’s. I am a little girl only 11 years old, but want you should be President of the United States very much so. I hope you wont think me very bold to write to such a great man as you ar 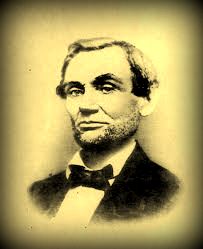 e. Have you any little girls about as large as I am if so give them my love and tell her to write to me if you cannot answer this letter. I have yet got four brothers and part of them will vote for you any way and if you let your whiskers grow I will try and get the rest of them to vote for you, you would look a great deal better for your face is so thin. All the ladies like whiskers and they would tease their husbands to vote for you and then you would be President. My father is going to vote for you and if I was a man I would vote for you to but I will try to get every one to vote for you that I can. I think that rail fence around your picture makes it look very pretty. I have got a little baby sister she is nine weeks old and is just as cunning as can be. When you direct your letter direct to Grace Bedell Westfield Chautauqua County New York.

My dear little Miss
Your very agreeable letter of the 15th is received. I regret the necessity of saying I have no daughters. I have three sons – one seventeen, one nine, and one seven, years of age. They, with their mother, constitute my whole family. As to the whiskers, having never worn any, do you not think people would call it a silly affection if I were to begin it now?
Your very sincere well wisher
A. Lincoln

Shortly after this, Lincoln allowed his beard to grow. By the time he began his inaugural journey from Illinois to Washington, D.C. by train, he had a full beard. The trip took him through New York State, and included a stop in Chautauqua County where thousands gathered to greet the president-elect.

The February 19, 1861 edition of the New York World recounted the events of the day:

“At Westfield an interesting incident occurred. Shortly after his nomination Mr. Lincoln had received from that place a letter from a little girl, who urged him, as a means of improving his personal appearance, to wear whiskers. Mr. Lincoln at the time replied, stating that although he was obliged by the suggestion, he feared his habits of life were too fixed to admit of even so slight a change as that which letting his beard grow involved. To-day, on reaching the place, he related the incident, and said that if that young lady was in the crowd he should be glad to see her. There was a momentary commotion, in the midst of which an old man, struggling through the crowd, approached, leading his daughter, a girl of apparently twelve or thirteen years of age, whom he introduced to Mr. Lincoln as his Westfield correspondent. Mr. Lincoln stooped down and kissed the child, and talked with her for some minutes. Her advice had not been thrown away upon the rugged chieftain. A beard of several months’ growth covers (perhaps adorns) the lower part of his face. The young girl’s peachy cheek must have been tickled with a stiff whisker, for the growth of which she was herself responsible.”

“He climbed down and sat down with me on the edge of the station platform,” she recalled. “‘Gracie,’ he said, ‘look at my whiskers. I have been growing them for you.’ Then he kissed me. I never saw him again.”