Margaret Sanger was the sixth of eleven children born to a good Irish Catholic family in Corning, New York. Her mother, Anne Higgins, lived through 18 pregnancies, 7 of which were miscarriages, before dying at the relatively young age of fifty. 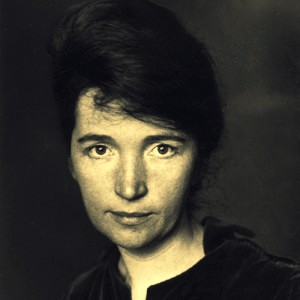 Margaret attended Claverack College and studied nursing at White Plains Hospital. In 1902, she married William Sanger and moved to Hasting, New York. They had three children in Hastings before moving to New York City in 1910. After moving to the city, Sanger began working as a visiting maternity nurse on the Lower East Side. She delivered babies in the homes of mostly poor, immigrant women who suffered from frequent childbirth, miscarriages and abortions.

“Tales were poured into my ears – a baby born dead, great relief – the death of an older child, sorrow but again relief of a sort – the story told a thousand times of death from abortion and children going into institutions. I shuddered with horror as I listened to the details and studied the reasons back of them – destitution linked with excessive childbearing. The waste of life seemed utterly senseless.”

Through these experiences, along with the death of her mother, Sanger became convinced that a woman must be free to control her own body and reproduction.

“My fight is for the personal liberty of the women who work. A woman’s body belongs to herself alone. It is her body. It does not belong to the Church. It does not belong to the United States of America or to any other Government of the face of the earth. The first step toward getting life, liberty and the pursuit of happiness for any woman is her decision whether or not she shall become a mother. Enforced motherhood is the most complete denial of a woman’s right to life and liberty.”

In 1912, Margaret Sanger published a series of sex education articles, “What Every Girl Should Know”, in the New York Call. These articles were suppressed because they were deemed to be obscene. In 1914, Sanger published The Woman Rebel which advocated the use of birth control techniques she had learned while in Europe. For this publication, she received her first federal indictment.

On October 16, 1916, Margaret Sanger and her sister Ethel Bryne opened a birth control clinic on Amboy Street in Brooklyn. Every morning, men and women lined up outside before the doors even opened. Sanger and Bryne, both nurses, would explain birth control techniques to both men and women and then refer the women to pharmacies where they could procure pessaries.

The Clinic operated secretly, relying on word of mouth and covert advertising to get women into the door. It served more than 100 women on its first day. On the tenth day, after serving 448 people, an undercover police woman and vice-squad officers raided the clinic and arrested Sanger for violations of the Comstock Laws.

Sanger was brought to trial and convicted, but she was offered a suspended sentence if she promised not to repeat the offense. She refused to make that promise.  She was given a choice of a fine or jail sentence. She chose thirty days in the Queens County Penitentiary.

Sanger appealed her conviction, and her case journeyed through the courts for a year.The New York Court of Appeals heard the case in January of 1918. Judge Frederick Crane sustained Sanger’s conviction, but, thanks to Margaret Sanger’s willingness to confront the law, he rendered a liberal interpretation of New York State’s “Little Comstock” law, which opened the door for  physicians to legally prescribe contraception for general health reasons, which led to doctor-staffed birth control clinics, and the ability of all women, regardless of income, access to effective contraceptives.