More precisely, on November 5, 1781, John Hanson was unanimously elected the first President of the United States in Congress Assembled, under the Articles of Confederation – even George Washington voted for him.

There had been Presidents of the Continental Congress before (Peyton Randolph, Henry Middleton, John Hancock, Henry Laurens, John Jay, 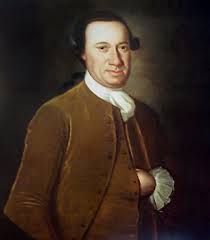 Samuel Huntington, Samuel Johnston and  Thomas McKean), but they merely presided over Congress. Now the Articles of Confederation brought the thirteen colonies together into a Confederation of United States, and specified the election of a President for a one year term to preside over Congress, chair the Committee of the States, and perform other administrative functions.

Hanson quickly got to work. No one had ever been President of all the United States before – the role was ill defined, his time in office would be short, and his actions would set precedent for future Presidents. The British had just surrendered at Yorktown and the troops expected to be paid, but of course there was no money in the treasury. There was a real risk that the disgruntled soldiers would overthrow the new confederacy and install their leader George Washington as monarch.

President Hanson somehow managed to calm the troops and hold the country together. In the chaos of the Revolution, many foreign countries had gotten into the action. He ordered all foreign troops off American soil and all foreign flags removed. He established the Treasury Department and the Foreign Affairs Department, appointed the first Secretary of War and established the Great Seal of the United States, which all Presidents have used authenticate official documents. Lastly, he declared that the fourth Thursday of every November to be Thanksgiving Day.

The Articles of Confederation didn’t work very well. The Presidency required Hanson to deal with correspondence and sign official documents, but it lacked true executive authority. The individual states held onto too much power and nothing could be agreed upon. Hanson found the work tedious and wished to resign. Unfortunately, the Articles of Confederation hadn’t provided a succession process and his departure would have left Congress without a President. Because he loved his country and out of a sense of duty he remained in office.

Six more Presidents would be elected after John Hanson – Elias Boudinot (1783), Thomas Mifflin (1784), Richard Henry Lee (1785), Nathan Gorman (1786), Arthur St. Clair (1787), and Cyrus Griffin (1788) – before the Articles of Confederation finally gave way to the Constitution of the United States and the election of George Washington.

President John Hanson is not remembered much today, but he was highly regarded in his day. Upon his death on November 21, 1783, this eulogy appeared in the Maryland Gazette:

“The nation which he helped to establish remains as a fitting tribute to his memory. It is doubtful if there has ever lived on this side of the Atlantic, a nobler character or shrewder statesman. One would search in vain to find a more powerful personage, or a more aggressive leader, in the annals of American history. and it is extremely doubtful if there has ever lived in an age since the advent of civilization, a man with a keener grasp of, or a deeper insight into, such democratic ideals as are essential to the promotion of personal liberty and the extension of human happiness. He was firm in his opinion that the people of America were capable of ruling themselves without the aid of a king.”