The hot shot pilots of the RAF had amused themselves during their air drills during the Great War by blowing smoke out their exhaust and creating designs in the sky. It is not clear who first thought of creating messages in the sky, but they might have learned the technique from Art Smith, the American barnstormer who flew at the Panama-Pacific Exposition in San Francisco in 1915 and after attaching flares to his plane ended his dare-devil stunts by writing “Good night” in the sky. 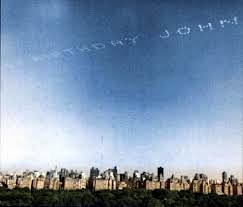 It is documented that the first public use in America of skywriting as an advertising medium was made when Capt. Cyril Turner of the Royal Air Force travelled to New York City in 1922. While another RAF pilot, John Savage, escorted George Hill, the president of the American Tobacco Company, on the ground, Turner spelled out “Hello USA Call Vanderbilt 7200” in the sky high above Time’s Square.

The ad men on Madison Avenue were astounded by the public’s reaction. “VANDERBILT 7200” was the phone number of the hotel at which George Hill was staying, and in the next three hours the hotel switchboard lit up non-stop as eight operators fielded 47,000 telephone calls.

Following this display, Allan J. Cameron, along with Leroy Van Patten established the Skywriting Corporation of America at Curtiss Field. They acquired the patents for mixing the writing gas in the United States, and, although it was nothing more than light paraffin oil fed through the exhaust system, they controlled the market for years.

Skywriting is becoming something of a lost art, but in 1980, to celebrate the 40th birthday of her husband John Lennon and the fifth of her son Sean, Yoko Ono hired an aircraft pilot to skywrite another message in the sky above Manhattan.

At around 5pm the skywriting began above the Dakota, and as crowds of fans ran to the open space of Central Park hoping for a glimpse of John Lennon, New Yorkers of every stripe paused for a moment wherever they were and looked up to see “Happy Birthday John & Sean – Love Yoko” written nine times across the sky.