“To see Men without Cloathes to cover their nakedness, without Blankets to lay on, without Shoes, by which their Marches might be traced by the Blood from their feet, and almost as often without Provisions as with; Marching through frost and Snow, and at Christmas taking up their Winter Quarters within a day’s March of the enemy, without a House or Hurt to cover them till they could be built and submitting to it without a murmur, is a mark of patience and obedience which in my opinion can scarce be parallel’d.”
—Letter from George Washington To John Banister, April 21, 1778 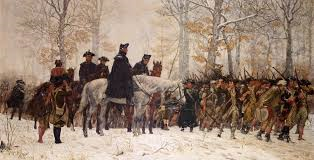 As winter set in on Pennsylvania, George Washington would much rather have been headed home to the warmth of Mount Vernon, but as Commander-in-Chief he was responsible for the Continental Army, even under the most trying conditions. The British had seized Philadelphia and forced Continental Congress to remove to York, but Washington had promised to “share in the hardship” and “partake of every inconvenience,” and so he led his soldiers into a bitter winter encampment.

When the ragtag Continental Army of 11,000 soldiers (and 500 women and children) marched into Valley Forge, a third of the soldiers had no shoes and many lacked warm coats to protect against the incessant rain and snow. The quartermaster reported that he had just twenty-five barrels of flour and only a little salt pork to feed the entire army. The soldiers struggled to build wooden huts and searched the countryside for straw to use as bedding since there were not enough blankets for everyone. The days grew shorter and the nights grew colder, but Washington hoped that his officers and soldiers, with “one heart” and “one mind,” would surmount the troubles that lay ahead.

The camp at Valley Forge sat on a plateau at the top of a series of protecting hills. Just eighteen miles from Philadelphia, it was far enough away from the rich farmland of Buck’s County to prevent the army from becoming a burden on the local population, but close enough to the occupied capital for the Continental Army to keep pressure on the British and prevent them from foraging across the countryside.

The soldiers trained as General Washington spent his time petitioning Congress for supplies while defending himself against charges of dictatorial ambitions. When he graciously received visiting congressional delegates, they realized that Washington respected the Congress and had no intention of launching a coup. Washington received key support from General Henry Knox, who built fortifications on the hills to defend against attacks, and from Generals Nathanael Greene and Anthony Wayne who scoured the countryside procuring horses, cattle, sheep, and hogs.

The Marquis de Lafayette organized officers from France, Poland, and other European nations into the Corps d’Étrangers, while a Prussian military officer, Baron Friedrich von Steuben, became drillmaster and taught the soldiers how to use the bayonet, and how to form lines quickly in the midst of battle.

Martha Washington arrived from Mount Vernon in February. She took over the management of her husband’s household, helped with his correspondence, and cheered him on by entertaining guests and even staging plays.

By early spring conditions at Valley Forge began to improve. Washington appointed General Greene as the new Quartermaster General and supplies started flowing into camp. The incessant rains continued, but the mood of the camp brightened when news arrived that France had entered into an alliance with the united colonies.

Washington ordered the Continental Army to parade on May 6, 1778 to celebrate the new alliance. Cannons boomed in salute. Thousands of muskets fired a “feu de joie,” a running fire that passed up and down the double ranks of infantrymen. Cheers echoed across the fields. The drilling order and imposing appearance that the troops presented demonstrated their remarkable progress into a unified, fighting force.

On June 19, the Continental Army marched out of Valley Forge. Still together, and in better discipline than before the winter, Washington’s soldiers headed for New Jersey where they would make a successful stand against the British at Monmouth Courthouse.