Just four years after Thomas Edison began the difficult process of perfecting the electric light bulb, a visiting reporter named Croffut from the Detroit Post and Tribune reported on the how this remarkable new invention had already begun transforming holiday celebrations in New York City: 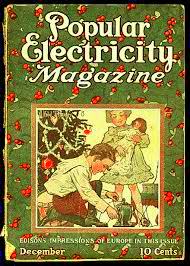 “Last evening I walked over beyond Fifth Avenue and called at the residence of Edward H. Johnson, vice-president of Edison’s electric company. There, at the rear of the beautiful parlors, was a large Christmas tree presenting a most picturesque and uncanny aspect. It was brilliantly lighted with many colored globes about as large as an English walnut and was turning some six times a minute on a little pine box. There were eighty lights in all encased in these dainty glass eggs, and about equally divided between white, red and blue. As the tree turned, the colors alternated, all the lamps going out and being relit at every revolution. The result was a continuous twinkling of dancing colors, red, white, blue, white, red, blue—all evening.

I need not tell you that the scintillating evergreen was a pretty sight—one can hardly imagine anything prettier. The ceiling was crossed obliquely with two wires on which hung 28 more of the tiny lights; and all the lights and the fantastic tree itself with its starry fruit were kept going by the slight electric current brought from the main office on a filmy wire. The tree was kept revolving by a little hidden crank below the floor which was turned by electricity.  It was a superb exhibition.”