Until 1903, New Yorkers generally gathered outside Trinity Church on Wall Street and Broadway to celebrate New Year’s Eve. The New York Times described the scene in 1897: “The crowds came from every section of the city, and among the thousands, who cheered or tooted tin horns, as the chimes were rung out on the night, were many from New Jersey, Long Island, and even Staten Island.”
But on New Year’s Eve, 1904, party-goers headed way uptown for their festivities. The New York Times had just built a tall triangular skyscraper where 7th Avenue, Broadway and 42 Street met, and the paper’s publisher, Adolph Ochs, had successfully lobbied city leaders to change the name of the intersection from “Longacre Square” to “Time’s Square” 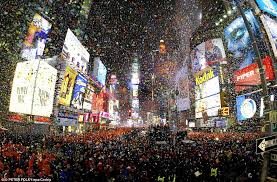 To celebrate his new headquarters Ochs planned  a New Year’s Eve celebration that would be the talk of the town. The party commenced with an all-day street festival which culminated in a fireworks display set off from the base of the tower, and at midnight the joyful sound of cheering, rattles and noisemakers from the over 200,000 attendees could be heard, it was said, all the way from Croton-on-Hudson, thirty miles north.

An annual event was born — but two years later, the city authorities, nervous about the possibility of fire, prohibited the fireworks display. Ochs was undaunted.  He arranged to have a large, illuminated seven-hundred-pound iron and wood ball lowered from the tower flagpole precisely at midnight to signal the end of 1907 and the beginning of 1908. The crowd in the square counted down as the ball descended, and then burst into cheers when the New Year arrived.
The New York Times moved west of the Square in 1913, but Times Square continued to be home to a ball drop ever since. The original ball of iron and wood was replaced in 1920 with a 400 pound orb of all iron. In 1955, an aluminum replacement weighed in at a considerably lighter 150 pounds, and was adorned with 180 light bulbs.

Times Square is still the place to be on New Years Eve.