On this day in 1920 federal agents under the direction of U.S. Attorney General A. Mitchell Palmer arrested more than three thousand alleged radicals in thirty-five American cities.

World War I was over, the Russian Revolution had succeeded and America was gripped in fear. Writing in the magazine “Forum”, Attorney General Palmer explained “The Case Against the ‘Reds’: 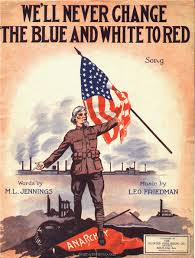 “Like a prairie-fire, the blaze of revolution was sweeping over every American institution of law and order a year ago. It was eating its way into the homes of the American workmen, its sharp tongues of revolutionary heat were licking the altars of the churches, leaping into the belfry of the school bell, crawling into the sacred corners of American homes, seeking to replace marriage vows with libertine laws, burning up the foundations of society. . .

The Government was in jeopardy; our private information of what was being done by the organization known as the Communist Party of America, with headquarters in Chicago, of what was being done by the Communist Internationale under their manifesto planned at Moscow last March by Trotzky, Lenin and others addressed “To the Proletariats of All Countries,” of what strides the Communist Labor Party was making, removed all doubt. In this conclusion we did not ignore the definite standards of personal liberty, of free speech, which is the very temperament and heart of the people. The evidence was examined with the utmost care, with a personal leaning toward freedom of thought and word on all questions. . .

My information showed that communism in this country was an organization of thousands of aliens who were direct allies of Trotzky. Aliens of the same misshapen caste of mind and indecencies of character, and it showed that they were making the same glittering promises of lawlessness, of criminal autocracy to Americans, that they had made to the Russian peasants. How the Department of Justice discovered upwards of 60,000 of these organized agitators of the Trotzky doctrine in the United States is the confidential information upon which the Government is now sweeping the nation clean of such alien filth….

It has been inferred by the “Reds” that the United States Government, by arresting and deporting them, is returning to the autocracy of Czardom, adopting the system that created the severity of Siberian banishment. My reply to such charges is that in our determination to maintain our government we are treating our alien enemies with extreme consideration. To deny them the privilege of remaining in a country which they have openly deplored as an unenlightened community, unfit for those who prefer the privileges of Bolshevism, should be no hardship. It strikes me as an odd form of reasoning that these Russian Bolsheviks who extol the Bolshevik rule should be so unwilling to return to Russia. The nationality of most of the alien “Reds” is Russian and German. There is almost no other nationality represented among them. . .

It is my belief that while they have stirred discontent in our midst, while they have caused irritating strikes, and while they have infected our social ideas with the disease of their own minds and their unclean morals we can get rid of them and not until we have done so shall we have removed the menace of Bolshevism for good.”