“There is nothing mysterious about the foundations of a healthy and strong democracy.

The basic things expected by our people of their political and economic systems are simple. They are:

– Equality of opportunity for youth and for others. 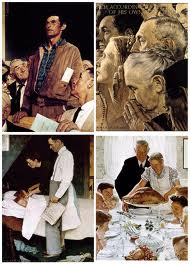 – Jobs for those who can work.
– Security for those who need it.
– The ending of special privilege for the few.
– The preservation of civil liberties for all.
– The enjoyment of the fruits of scientific progress in a wider and constantly rising standard of living.

These are the simple, the basic things that must never be lost sight of in the turmoil and unbelievable complexity of our modern world. The inner and abiding strength of our economic and political systems is dependent upon the degree to which they fulfill these expectations.

Many subjects connected with our social economy call for immediate improvement. As examples:

– We should bring more citizens under the coverage of old-age pensions and unemployment insurance.
– We should widen the opportunities for adequate medical care.
– We should plan a better system by which persons deserving or needing gainful employment may obtain it.

. . .In the future days, which we seek to make secure, we look forward to a world founded upon four essential human freedoms.

That is no vision of a distant millennium. It is a definite basis for a kind of world attainable in our own time and generation…

Since the beginning of our American history we have been engaged in change, in a perpetual, peaceful revolution, a revolution which goes on steadily, quietly, adjusting itself to changing conditions without the concentration camp or the quicklime in the ditch. The world order which we seek is the cooperation of free countries, working together in a friendly, civilized society.

This nation has placed its destiny in the hands and heads and hearts of its millions of free men and women, and its faith in freedom under the guidance of God. Freedom means the supremacy of human rights everywhere. Our support goes to those who struggle to gain those rights and keep them. Our strength is our unity of purpose.

To that high concept there can be no end save victory.”