On this date in 1822 the ship Elizabeth landed on “Providence Island,” in what is now the African nation of Liberia carrying a cargo of freed slaves who had crossed the Atlantic to colonize a new country in the homeland of their ancestors. 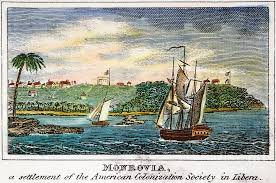 “The close of the Administration of James Madison witnessed the inauguration of the Colonization scheme. The country had just begun to recover from the depression occasioned by the war with England. A political campaign was just over, and a spirit of hopefulness for the future had begun to be felt by the American people . . .

For more than one hundred and fifty years the transatlantic African slave trade was carried on with the approbation or consent of the whole Christian world, and Africa poured forth her sons by scores of thousands to do the labor and drudgery of the Western world. The time was now drawing near for the deliverance of this suffering race.
Men of prudent foresight, contemplating the justice of God, began to tremble for a country in which an innocent people were subjected to labor so constant, and to mental and physical influences so degrading. They felt the premonitory currents of a coming storm, and contended that measures should be adopted for the amelioration of the condition of the negroes, and the removal from the land of an institution which was exercising a blighting influence upon its moral and industrial energies.

But among these sympathizers with the negro there were conflicting views as to the manner in which, compatibly with the welfare of all concerned, the desired object could be secured. Two parties arose, one contending for a gradual abolition of slavery, with a simultaneous removal of the free blacks from the United States; the other demanding immediate and unconditional emancipation.

The unconditional abolitionists went forth throughout the country and denounced in energetic terms the holding of men in bondage.
The other party, including in its ranks many of the best friends of the negro, felt it their duty also to testify against the gigantic evil. But they chose a different method. They saw that slavery was a Gordian knot which could not be so easily cut as their more sanguine and impetuous opponents supposed; that it must be untied with infinite labor and skill . . .

Are we to suppose that there was no benevolence in the hearts of the scores of slaveholders in the South who not only advocated the cause of the Society but liberated and sent their slaves to Liberia? Are we to suppose that selfishness was the motive, the only motive, that prompted their action? And must we believe that there was a want of honest principle in the course pursued by the Society in admitting to its ranks men of all shades of political opinion? Was there a dereliction of duty?

Let us look at the matter calmly and dispassionately. Their aim was to reach the blacks throughout the whole country and to secure the emigration of a large number, if not the majority of them, to Africa. Was it wrong in them, with this object in view, to secure for their cause the confidence and cooperation of such men as Bushrod Washington, Charles Carroll, James Madison, John Randolph, and Henry Clay as well as of distinguished men of the North? …

As an African we surely cannot withhold the tribute of our unfeigned admiration and gratitude from the men who went forth with drawn swords against the evil of slavery. It is to us unspeakably refreshing to watch them, in the annals of those times, wielding the tomahawk with such heartiness against the “peculiar institution”.

But, as a dispassionate spectator, we must contend that there was sound philosophy and practical wisdom in the course pursued by the Colonization Society. It would have been the reverse of prudent in them to begin their labors by ignoring the rights of slaveholders to their property- rights guaranteed by the laws of the land. This would not only have excited violent antagonism on the part of slaveholders, but would have exhibited so signal a divorce between judgment and benevolence, between discretion and energy, as would have alienated from their cause many earnest well-wishers of the negro among non-slaveholders, North and South, and thus led to a defeat of the object they had in view.

Say what we please of lofty generosity and the power of truth, our dealings with the world convince us that where the interests of men are concerned, abstract arguments of right and justice make very little headway.”