“Little Tim” Sullivan was outraged. He had heard the announcements made just before New Year’s Eve that certain restaurants in New York would permit women to smoke in their establishments during the celebrations.

He admitted that he had never seen women smoking in public places in his district (the Lower East Side), but he had 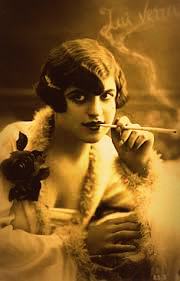 consulted several leading restaurateurs and they were very much in favor of an ordinance  restricting this outrageous behavior.

He proposed an ordinance which made it an offense for the manager or proprietor of a public place to allow women to smoke therein. A violator might suffer the revocation of his license and also be fined.
Eleven women and fifteen men showed up at the Board of Aldermen’s hearing on the proposed ordinance.

Dr. Charles J. Pease wanted to make an amendment making it a crime for “any person or persons” to smoke in a public place where there were women, who ought not to be forced to inhale tobacco fumes. John Henry Smith, shaking his fist at Alderman Sullivan, said it would be much better for the board to concern itself with the hardships of the poor than with “such nonsensical things” as smoking by a few women in a restaurant. If the Aldermen were going to take up the matter at all, “why didn’t they prohibit everybody smoking, especially boys under 21?”

Alderman Doull recalled old William Kieft, Governor of New Amsterdam, who tried to prohibit all smoking, and how the burghers sat around his house and actually smoked him out. He recalled Peter Stuyvesant’s order that all women should wear broad flounces and only dance “shuffle and turn” steps, bring down on his head the wrath of all the women who threatened to wear no petticoats at all, and finally were allowed to do as they pleased, “a privilege they have jealously guarded ever since.”

“Bobbie” Roberts and a lot of other girls from Wallack’s had their carfare paid by the press agent of “A Knight for a Day,” and Miss Roberts told how “we girls from Chicago” thought the policemen ought to stop automobiles going so fast that they made the ladies of the theatrical profession “hop, skip, and jump” across the street instead of passing anti-smoking ordinances. “We girls from Chicago don’t smoke anyway.”