In mid-January 1943, a sea of polar air pushed southward from Canada across the central United States. By the morning of January 19, temperatures were well below zero as far south as Kansas and in the single digits across Texas. Thankfully, on January 20, warmer air started to spread eastward from the Pacific. 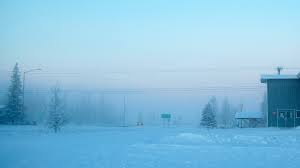 When the wave of warmer air approached the front range of the Rockies temperatures began to rise sharply, with Casper WY reaching 22 degrees while Rapid City, further east, remained at 20° below.

Eventually the Chinook winds blew the warm air aloft onto the higher elevations of the Black Hills. Temperatures warmed into the 30s at Custer and Lead located higher in the hills, but the temperature remained below zero in Rapid City and Spearfish as cold air still possessed the lower plains.

The following day the front advanced again to the northeast, and temperatures reached the 40s in the Hills but struggled to get above zero on the plains. At 11 a.m. on the east side of the Alex Johnson Hotel in Rapid City, winter still held its grip, but spring had suddenly arrived around the corner on the south side, not 50 feet away, only to be swept away by another blast of  winter, and then return again.

At one time the temperature at Lead was 52° while at Deadwood, just three miles away (but in the canyon), it was 16° below. Plateglass windows cracked as the temperature rapidly rose. Streets were coated instantly with a peculiar light frost, and motorists had to pull over, unable to see through the thick frost that instantly iced their windshields from the sudden warm wind.

Cedric Barnes was driving to his job at the Black Hills Airport:

“I live at St. Onge, about 5 miles north and 3 miles east of the station. When I left, the temperature was between 5° and 10° below zero F., which was expected. About half way south, the windshield on the car frosted so suddenly and so heavily that I was well toward the ditch before I could get stopped.

When I got out to clean the windshield of the car, it felt like a warm spring day with about 15 miles of wind from the SW. When I reached the station, about 8:15 a. m. the temperature was 45° F., with WSW 44-mile wind, and rain showers.

Having no extra thermometer at the station, I took the operator who had just gone off watch, and returned to St. Onge, where I had a glass, centigrade, chemical thermometer, which I knew was reasonably accurate. We left St. Onge about 9:15 a. m. The temperature was then -18° C. In the next 2 miles the temperature rose to -16.1°  C. In the next ¼ mile it raised to -13.0° C. This distance is in a creek bottom from 20 to 50 feet below the surrounding land.

In the next 200 to 300 feet, the windshield frosted as it had before. We got out to clean it. From tracks in the snow we found that we were only 10 feet from where I had stopped an hour before! The thermometer read plus 9.8° C.

We had come up about 80 feet out of the creek bottom. A little further south and a little higher up we looked back. There was a line of white, thick stratus following the creek, the tops from 100 to 150 feet above the surface, with heavy snow blowing from the northeast. The wind was about 30 mile SW where we were, 1/4 mile away.”

As waves of the front moved northward, lower elevations of the Black Hills felt the warm air encroaching above the sea of cold air; but fluctuating waves of cold continued to cause extremely sharp variations. At low ebb, almost the entire island would emerge from the cold, but then the tide would reverse and the cold air become progressively deeper, until the entire island lay submerged.

The front finally shifted south again late in the afternoon, and winter cold returned to the Black Hills.