By early February, winter is starting to get old and everyone is itching to see a sign of spring. Farmers start to get nervous about whether they have put up enough hay to get through the rest of the winter. “Groundhog Day – Half your Hay” is the old proverb they repeat as they count the remaining supply in their hay lofts. 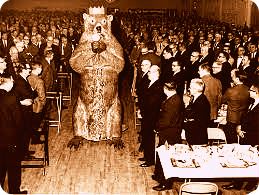 The first record of Groundhog Day as we know it comes from the diary of James Morris, a storekeeper in Berks County of Pennsylvania, who noted back in February of 1841:

“Last Tuesday, the 2nd, was Candlemas day, the day on which, according to the Germans, the Groundhog peeps out of his winter quarters and if he sees his shadow he pops back for another six weeks nap, but if the day be cloudy he remains out, as the weather is to be moderate.”

An old English poem associated Candlemas, when beeswax candles were blessed to celebrate the presentation of Christ in the Temple, with a weather forecast:

If Candlemas be fair and bright,
Come, Winter, have another flight;
If Candlemas brings clouds and rain,
Go Winter, and come not again.

Back in the old country, the Germans had looked to either a hibernating badger or a hedgehog as a weather prognosticator as winter neared the halfway mark. When they got to Pennsylvania neither of those animals could be found, but the groundhog was everywhere.

The Scotch-Irish in western Pennsylvania tried to appropriate the holiday in 1886 when “The Punxsutawney Spirit” newspaper would dub their resident rodent “Punxsutawney Phil, Seer of Seers, Sage of Sages, Prognosticator of Prognosticators, and Weather Prophet Extraordinary” and start a tradition.

But eastern Pennsylvania was always the true home of the groundhog. Berks and Lehigh Counties in eastern Pennsylvania had been for the main part German speaking societies for their first three hundred years. But by the early nineteen-thirties English was taking over in most communities and German Americans looked for ways to preserve their heritage.

In 1934 William “Pumpernickle Bill” Troxell, who wrote a “Pennsylvania Dutch” column for the Allentown Morning Call, organized some local German Americans into the first “Grundsow” (Groundhog) Lodge at the Keystone Trail Inn in Allentown. They proclaimed the groundhog to be their King for the day on February 2nd and burned off some cabin fever with good clean fun.

The lodge still meets every year at a “Fersommling” (Gathering) on “Grundsow” Day to hear the groundhog make its annual weather prognostication, and to enjoy an evening eating scrapple and shoo fly pie, speaking “Pennsilfaanisch Deitsch” with “g’spiel” (plays or skits) , singing “Mei Land, ich sing von dir” (My Country, ‘Tis of Thee), and celebrating old traditions and customs.  Pennsylvania Dutch is the only language permitted and those who slip up and speak in English must pay a nickel per word into a bowl in the center of the table.

Today there are 17 “Grundsow” lodges in Berks and Lehigh Counties, and a “Grossdaddi” (Grandfather) Grundsow Lodge in Kutztown, which celebrate Pennsylvania’s German cultural heritage and keep the Pennsylvania Dutch dialect alive.

Here is another useful saying to predict the weather::
“Wann der Hund dich uff der Buckel legt, gebt’s Schnee!”
(When the dog lies on his back, there will be snow!)