In 1819, Abigail Powers was a teacher at the New Hope Academy in upper New York State. Millard Fillmore was working off an indenture, chopping wood, milking cows, making cloth and doing what he could to get by. 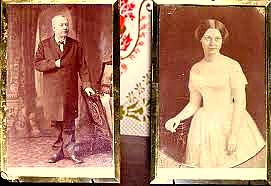 Abigail was the daughter of a Baptist minister and grew up in a home with a large collection of books. Millard Fillmore never had the benefit of a continuous education, but he did have a thirst for knowledge and he read voraciously – using a dictionary to learn the meaning of words he didn’t understand.

Fortunately for Millard Fillmore, his poverty and drive for knowledge was mirrored Abigail’s own experience and ambition. She helped him learn, and on subjects where they both lacked knowledge, they studied together.

When Fillmore moved to Buffalo to further his education, he soon realized he had been “unconsciously stimulated by the companionship” of his teacher. Abigail and Millard did not see each other for three years but they corresponded and shared their hopes and dreams.

In Buffalo, Fillmore studied for a career in law. Despite their separation and skepticism from Abigail’s family regarding his suitability as a husband, the relationship survived through their letters. They were married at her oldest brother’s house in Moravia, New York, on February 5, 1826.

Abigail continued to teach for more than a year after the wedding, but after becoming pregnant with the first of two children, she turned her focus to supporting her husband’s career. She kept abreast of the important issues of the day by reading newspapers and listening to debates and he was soon elected to Congress.

His political career took off and in 1848 Fillmore was elected Vice President. When Zachary Taylor came down with cholera and died in July 1850, Millard Fillmore suddenly became the 13th President of the United States, and Abigail became First Lady.

Abigail was shocked upon coming to the White House that it had no library and promptly began lobbying for funds to create one. Despite a lingering foot injury that made it difficult to stand, Abigail boosted her husband’s profile through her public appearances, though she preferred attending art galleries and lectures over glitzy social events.

She hosted some of the era’s renowned artists, including Washington Irving and Charles Dickens and opera singer Jenny Lind. She remained an important advisor during her husband’s tenure as president, although his failure to heed her suggestion to veto the Fugitive Slave Act likely doomed his chances of earning the Whig Party’s re-nomination in 1852.

Abigail was looking forward to a tour of the Southern states as her husband’s term of office drew to a close. Unfortunately she caught a cold standing outdoors during the inauguration of his successor Franklin Pierce. The next day she came down with a fever, and she was moved to the nearby Willard Hotel for care, but the fever turned into bronchial pneumonia.