The United States Coast Survey was authorized by Congress and President Thomas Jefferson in 1807 to survey “the coasts of the United States, in which shall be designated the islands and shoals, with the roads or places of anchorage, within twenty leagues of any part of the shores of the United States; and also the respective courses and distances 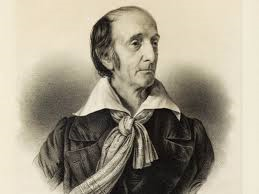 between the principal capes, or head lands, together with such other matters as he may deem proper for completing an accurate chart of every part of the coasts within the extent aforesaid.”

Just as Lewis and Clark had been sent to explore the western frontier, Ferdinand Rudolph Hassler, a recent Swiss immigrant who had taken part in the survey of Switzerland and served as its Attorney General, was charged with charting the coastal waters of the United States as well as the St. George’s bank and the Gulf Stream.

Drawing on his deep experience as both a scientist and a lawyer, he brought together mathematicians, cartographers, geodesists, metrologists, hydrographers, topographers, sailors, laborers, and administrators and molded them into the first United States Government agency which collected masses of geographic information, developed means to process that information, and produced products for the safety and welfare of the citizens of our Nation.

The Coast Survey developed accurate maps and mathematical models for predicting future states of geophysical phenomena such as tides, currents, and geomagnetic declination. Its work proved instrumental in the formation of the Smithsonian Institution and the National Academy of Sciences and the establishment of their early policies.

Hassler was criticized for his foreign ways, but he accomplished much more than just surveying the coast. He fought the first budget and administrative battles with bureaucrats and lawmakers who did not understand the nature of science or its requirements; trained a cadre of surveyors, topographers, and artisans, and helped establish our nation’s standards of weights and measures on a scientific basis.

More than anything else, he elevated the status of science in government and society. He came to a nation with little science infrastructure and left a thriving organization of mathematicians, geodesists, topographers, hydrographers, instrument-makers, engravers, and printers who worked in concert to collect and process the data for our nautical charts.

As the first professional American scientist Ferdinand Rudolph Hassler left a legacy of accuracy, precision, and scientific integrity with which he imbued not only the Coast Survey but, ultimately, all American science institutions