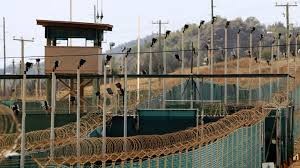 “ARTICLE VII. To enable the United States to maintain the independence of Cuba, and to protect the people thereof, as well as for its own defense, the Cuban Government will sell or lease to the United States the lands necessary for coaling or naval stations, at certain specified points, to be agreed upon with the President of the United States.”
have reached an agreement to that end, as follows:

ARTICLE I
The Republic of Cuba hereby leases to the United States, for the time required for the purposes of coaling and naval stations, the following described areas of land and water situated in the Island of Cuba:

The grant of the foregoing Article shall include the right to use and occupy the waters adjacent to said areas of land and water, and to improve and deepen the entrances thereto and the anchorages therein, and generally to do any and all things necessary to fit the premises for use as coaling or naval stations only, and for no other purpose.

Vessels engaged in the Cuban trade shall have free passage through the waters included within this grant.

Done in duplicate at Habana, and signed by the President of the
Republic of Cuba this sixteenth day of February, 1903.
T. ESTRADA PALMA

Signed by the President of the United States the twenty-third of February, 1903.
THEODORE ROOSEVELT