Malcolm Campbell was born in Chislehurst, Kent, England in 1885. He served in the Great War in the Queen’s Own Royal West Kent Regiment and in the British Royal Air Force where he achieved the rank of Captain, a nickname that would remain with him the rest of his life.

Campbell loved to fly and he loved to drive fast. He set his first land speed record on June 17, 1922, when he drove at 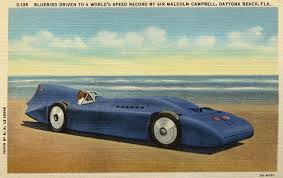 IN 1932 Malcom Campbell came to the United States looking to run on the eight mile stretch of cement hard sands found at Daytona Beach.

He adjusted the placement of the radiator so that the cooling air did not enter the engine compartment, but rushed through the radiator only, and moved the transmission to one side and the driver sat alongside the propeller shaft, thus making the car even lower and less resistant to wind. A larger stabilising directional fin was added.

Even more power was found by substituting a Schneider Trophy supercharged Napier engine for the earlier Lion type. This gave 1,350 horsepower at 3600 rpm, compared with the 900 horse-power of the un-supercharged engine.

As a huge crowd lined the beach, Malcolm smiled for the cameras, before he roared the “Bluebird” along the Florida sands at an incredible 253.96 miles per hour.

Upon smashing the record Campbell pulled up and gives his wife a hug and a kiss.