In 1939, the Daughters of the American Revolution after it barred Marian Anderson from performing an Easter concert at its Constitution Hall in Washington, DC. citing a “white artists only” restriction in the hall’s lease.

After coming to the conclusion that to remain as a member of the D.A.R. implied approval of that action, First Lady Eleanor Roosevelt sent the following letter:

I am afraid that I have never been a very useful member of the Daughters of the American Revolution, so I know it 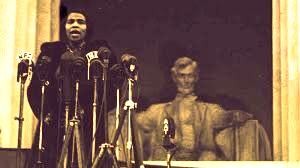 will make very little difference to you whether I resign, or whether I continue to be a member of your organization.

However, I am in complete disagreement with the attitude taken in refusing Constitution Hall to a great artist. You have set an example which seems to me unfortunate, and I feel obliged to send in to you my resignation. You had an opportunity to lead in an enlightened way and it seems to me that your organization has failed.

I realize that many people will not agree with me, but feeling as I do this seems to me the only proper procedure to follow.

On Easter Sunday 1939,  Marian Anderson gave her concert, but she performed at the Lincoln Memorial before seventy-five thousand people – black, white, old, and young.  She opened her concert with “America.” The operatic first half of the program concluded with “Ave Maria.” After a short intermission, she sang a selection of spirituals, and then with tears in her eyes, Marian Anderson closed the concert with “Nobody Knows the Trouble I’ve Seen”.