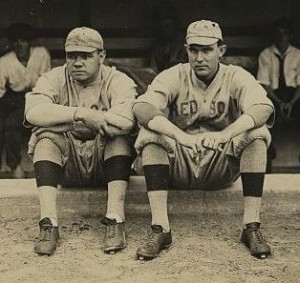 Babe Ruth was the starting pitcher for the Boston Red Sox, throwing against the Washington Senators in the first game of a Saturday doubleheader. The first pitch he threw against the lead-off batter, Ray Morgan, was called a ball by plate umpire “Brick” Owens. The Babe threw his second pitch over the plate, sure that it was a strike, but Owens again called a ball.

The Babe was miffed, and he let “Brick” know it. He threw again – again it was called a strike. Down 3 and 0 in the count, the Babe gave the ump another piece of his mind, then hurled his fourth pitch right over the plate.

The ump called “Ball Four!” and the Babe charged off the mound and ripped into Owens: ““If you’d go to bed at night, you *!@#$%*, you could keep your eyes open long enough in the daytime to see when a ball goes over the plate!”

Owens politely begged to disagree and told Ruth to shut up and get back to the mound or he’d be thrown out of the game.

“Throw me out and I’ll punch ya right in the jaw!” Ruth replied. Owens jerked his thumb towards the dugout and Ruth responded with his fist, striking a glancing blow behind the ump’s ear and knocking him to the ground. The Boston police emerged from the runway and escorted the Babe off the field.

Ernie Shore was then called out of the dugout to replace Ruth, while catcher Sam Agnew took over behind the plate for Pinch Thomas. Ray Morgan attempted a steal on the first pitch, but Agnew threw him out, and then Shore proceeded to methodically retire the next 26 batters.

All 27 outs were made while Ernie Shore was on the mound. Once recognized as a perfect game by Major League Baseball, it is still counted as a combined no-hitter.

Babe Ruth paid a $100 fine, was suspended for ten games, and made a public apology for his behavior. The Red Sox owner, Harry Frazee, always in a bind for cash, sold Ernie Shore to the New York Yankees at the end of the season, and sold them Babe Ruth as well, two years later.