Thomas Jefferson never trusted Aaron Burr. Not after he almost snaked the presidency away from him in the contested election of 1800. Not after Vice President Burr shot Alexander Hamilton dead in a duel. Not after Burr took off down the Ohio River and the rumors swirled that he was headed for New Orleans, and Mexico after that…

When he saw the letter Burr had written, in cypher, to General James Wilkinson in July, 1806, Jefferson was sure that 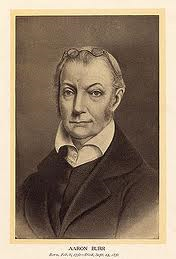 Burr was planning to lead the west in revolt against the United States.

The decoded letter read as follows:

“Your letter, postmarked 13th May, is received. At length I have obtained funds, and have actually commenced. The eastern detachments from different points, and under different pretenses, will rendezvous on the Ohio, 1st of November. Everything internal and external favors our views. Naval protection of England is secured. Truxton is going to Jamaica, to arrange with the Admiral on that station. It will meet us at the Mississippi. England, a navy of the United States, are ready to join, and final orders are given to my friends and followers. It will be a host of choice spirits. Wilkinson shall be second to Burr only, and Wilkinson shall dictate the rank and promotion of his officers.

BURR will proceed westward 1st of August, never to return. With
him go his daughter and grandson. The husband will follow in October, with a CORPS of worthies. Send, forthwith, an intelligent friend with whom Burr may confer. He shall return immediately with further interesting details: this is essential to harmony and concert of movement.

Send a list of all persons known to Wilkinson west of the mountains, who could be useful, with a note delineating their character. By your messenger, send me four or five of the commissions of your officers, which you can borrow under any pretense you please. They shall be retained faithfully. Already are orders given to the contractor to forward six months’ provision to points Wilkinson may name ; this shall not be used until the last moment, and then under proper injunctions.

Our project, my dear friend, is brought to a point so long desired. Burr guarantees the result with his life and honor, with the lives, and honor, and the fortunes of hundreds, the best blood of our country. Burr’s plan of operation is to move down rapidly, from the falls, on the 15th of November, with the first five hundred or one thousand men, in light boats now constructing for that purpose, to be at Natchez between the 5th and 15th of December, there to meet you, there to determine whether it will be expedient, in the first instance, to seize on, or pass by, Baton Rouge. … on receipt of this, send Burr an answer, …. draw on Burr for all expenses, etc.

The people of the country to which we are going are prepared to receive us ; their agents, now with Burr, say that if we will protect their religion, and will not subject them to a foreign power, that, in three weeks, all will be settled. The gods invite us to glory and fortune; it remains to be seen whether we deserve the boon. The bearer of this goes express to you; he will hand a formal letter of introduction to you, from Burr ; he is a man of inviolable honor and perfect discretion, formed to execute rather than project, capable of relating facts with fidelity, and incapable of relating them otherwise.

He is thoroughly informed of the plans and intentions of , and will disclose to you, as far as you inquire, and no further ; he has imbibed a reverence for your character, and may be embarrassed in your presence; put him at ease, and he will satisfy you.’ “

“Had I read Sterne more and Voltaire less, I should have known the world was wide enough for Hamilton and me.”          – Aaron Burr

“I never expect to see a perfect work from an imperfect man.”
– Alexander Hamilton 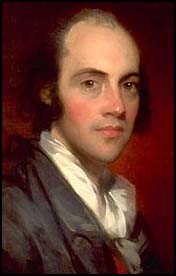 “The rule of my life is to make business a pleasure, and pleasure my business.”       – Aaron Burr

“Those who stand for nothing fall for anything.”   – Alexander Hamilton

“Law is whatever is boldly asserted and plausibly maintained.” 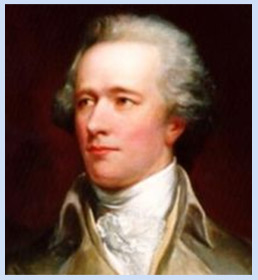 “In New York I am to be disenfranchised, and in New Jersey hanged. You will not…conclude that I have become disposed to submit tamely to the machinations of a banditti.”         – Aaron Burr

“The voice of the people has been said to be the voice of God; and, however generally this maxim has been quoted and believed, it is not true to fact. The people are turbulent and changing, they seldom judge or determine right. .”                    – Alexander Hamilton

“I learned in the Revolution, in the society of gentlemen, and I have since observed for myself, that a man who is guilty of intentional bad manners, is capable of crime.”                  – Aaron Burr

“Man is a reasoning, rather than reasonable, animal.”
– Alexander Hamilton