December 26, 1919: The Curse of the Bambino; Babe Ruth is Sold to the Yankees

“There is no getting away from the fact that despite his 29 home runs, the Red Sox finished sixth last year. What the Boston fans want, I take it, and what I want because they want it, is a winning team, rather than a one-man team that finishes in sixth place.”
– Harry Frazee 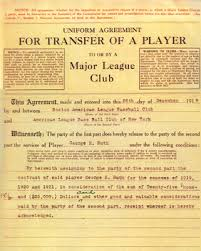 Being from New York City, Harry Frazee was always regarded with suspicion by Boston’s sportswriters and baseball fans. He only won them over by being willing to spend big money to acquire top players, even offering the Senators $60,000 for Walter Johnson, to build a winning team on the field.

In 1919, the “Bambino” hit a homer in every American League park, playing 111 games in the outfield when he wasn’t pitching and led the league in home runs (29), runs (103), and RBIs (114). Ruth’s home runs made him a national sensation and brought record-breaking attendance. Even so, the team finished in sixth place and Frazee called Ruth’s home runs “more spectacular than useful.”

Meanwhile, Jacob Ruppert, the New York Yankee’s principal owner, desperately needed a winning team. He asked the Yankee’s manager Miller Huggins what the team needed to be successful. “Get Ruth from Boston” came the answer, along with the hint that Frazee was perennially in need of money to finance his theatrical productions.

On the day after Christmas, 1919, Jacob Ruppert bought the rights to Babe Ruth from Harry Frazee for $100,000, the largest sum ever paid for a baseball player. The $100,000 price included $25,000 in cash, and notes for the balance; Ruppert and Huston assisted Frazee in selling the notes to banks for immediate cash. The deal also involved a $350,000 loan from Ruppert to Frazee, secured by a mortgage on Fenway Park.

The New York Times commented on the acquisition, “The short right field wall at the Polo Grounds should prove an easy target for Ruth next season and, playing seventy-seven games at home, it would not be surprising if Ruth surpassed his home run record of twenty-nine circuit clouts next Summer.”

Ruth hit 54 home runs in 1920. He broke that record several times in the years that followed. His record of 60 home runs in 1927 stood for 34 years. The Yankees, who had never won even the American League championship, went on to win seven pennants and four World Series titles with the “Sultan of Swat”.

The Red Sox, winners of five of the first sixteen World Series, would not win another pennant until 1946, and the “Curse of the Bambino” would not be fully reversed for 86 years until they finally won another World Series in 2004.

Babe Ruth was the starting pitcher for the Boston Red Sox, throwing against the Washington Senators in the first game of a Saturday doubleheader. The first pitch he threw against the lead-off batter, Ray Morgan, was called a ball by plate umpire “Brick” Owens. The Babe threw his second pitch over the plate, sure that it was a strike, but Owens again called a ball.

The Babe was miffed, and he let “Brick” know it. He threw again – again it was called a strike. Down 3 and 0 in the count, the Babe gave the ump another piece of his mind, then hurled his fourth pitch right over the plate.

The ump called “Ball Four!” and the Babe charged off the mound and ripped into Owens: ““If you’d go to bed at night, you *!@#$%*, you could keep your eyes open long enough in the daytime to see when a ball goes over the plate!”

Owens politely begged to disagree and told Ruth to shut up and get back to the mound or he’d be thrown out of the game.

“Throw me out and I’ll punch ya right in the jaw!” Ruth replied. Owens jerked his thumb towards the dugout and Ruth responded with his fist, striking a glancing blow behind the ump’s ear and knocking him to the ground. The Boston police emerged from the runway and escorted the Babe off the field.

Ernie Shore was then called out of the dugout to replace Ruth, while catcher Sam Agnew took over behind the plate for Pinch Thomas. Ray Morgan attempted a steal on the first pitch, but Agnew threw him out, and then Shore proceeded to methodically retire the next 26 batters.

All 27 outs were made while Ernie Shore was on the mound. Once recognized as a perfect game by Major League Baseball, it is still counted as a combined no-hitter.

Babe Ruth paid a $100 fine, was suspended for ten games, and made a public apology for his behavior. The Red Sox owner, Harry Frazee, always in a bind for cash, sold Ernie Shore to the New York Yankees at the end of the season, and sold them Babe Ruth as well, two years later.