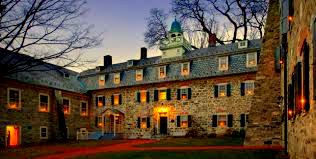 In 1741 a small group of the “Unitas Fratrum” settled on the banks of the Monocacy Creek near the Lehigh River in Eastern Pennsylvania. The settlers were part of a German speaking sect which had been founded by followers of John Hus, who had been burned at the stake 100 years before Martin Luther for trying to reform the Catholic Church. They called themselves “Moravians” because many of the founders came from the province of Moravia in what is now the Czech Republic.

The Moravians had been sent out from their homeland to bring the good news of salvation and hope to the heathens. They had reached out to slaves in the Caribbean, the Inuit in Labrador, to natives in Surinam, Guyana, and South Africa, and here in Pennsylvania they would reach out to the Delaware and Mohicans.

The “Unitas Fratrum” promoted what they called the “theology of the heart”. They tried to focus on the essential relationship between Christ and the believer rather than being overly concerned about doctrinal differences between churches. Christianity was defined as faith in Christ, love for one another and the world, and hope for the future.

The community they were founding was above all to be joyful. Daily life should be marked by joy in the presence of Christ in every activity. They would live communally, the “brothers” in one house and the “sisters” in another. They placed their trust in God to help them, and picked their leaders and even their marriages by lot. They shared a simple meal, a lovefeast, during worship remembering that Jesus ate his meals not only with his disciples but also with sinners.

On Christmas Eve of 1741, the Moravians’ patron, Count Nicholas Ludwig von Zinzendorf arrived from Saxony to visit the new settlement. The brothers and sisters gathered in the two-room log home that they had just built to welcome the Count and to worship and give thanks, while their cattle and horses and pigs and chickens settled in the stable side of the house.

The little town of Bethlehem was hailed, its boon to mankind was lauded, the star that guided the magi to the spot and the light of the gentiles there beaming forth were sought, humble supplication at the Redeemer’s feet was uttered in successive stanzas, and then the song ended. One who was present wrote long afterward: “The impression I there received is yet fresh in my memory, and will remain until my end.”

With this episode a thought came to one and another which gave rise to a perpetual memorial of the occasion, signalizing it as peculiarly historic and enhancing its romantic interest. No name had yet been given to the settlement.

That vigil service and that hymn suggested one. By general consent the name of the ancient town of David was adopted and the place was called Bethlehem.”