November 25, 1947: “The Hollywood 10” is blacklisted by Hollywood Movie Studios

John Howard Lawson, the president of the Screen Writers’ Guild was the first “unfriendly” witness subpoenaed to testify before the House Committee on Un-American Activities (HUAC) investigation into alleged Communist influence in Hollywood. This followed a week-long session during which numerous studio heads, stars, a…nd others (including the current SAG president Ronald Reagan) spoke at length about purported Communist activity in the film industry:

Mr. STRIPLING. What is your occupation, Mr. Lawson? 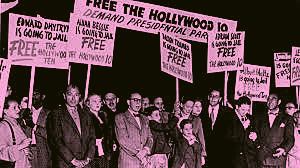 Mr. STRIPLING. How long have you been a writer?

Mr. STRIPLING. Are you a member of the Screen Writers Guild?

Mr. LAWSON. The raising of any question here in regard to membership, political beliefs, or affiliation—

Mr. LAWSON. Is absolutely beyond the powers of this committee.

Mr. LAWSON. It is a matter of public record that I am a member of the Screen Writers Guild.

The CHAIRMAN. I want to caution the people in the audience: You are the guests of this committee and you will have to maintain order at all times. I do not care for any applause or any demonstrations of one kind or another. . .

Mr. LAWSON (continuing). Witnesses in this room to make answers of three or four or five hundred words to questions here.

The CHAIRMAN. Mr. Lawson, you will please be responsive to these questions and not continue to try to disrupt these hearings.

Mr. LAWSON. I am not on trial here, Mr. Chairman. This committee is on trial here before the American people. Let us get that straight.

The CHAIRMAN. We don’t want you to be on trial.

Mr. STRIPLING. Mr. Lawson, how long have you been a member of the Screen Writers Guild?

Mr. STRIPLING. Have you ever held any office in the guild?

Mr. LAWSON. The question of whether I have held office is also a question which is beyond the purview of this Committee.
(The chairman pounding gavel.)

Mr. LAWSON. It is an invasion of the right of association under the Bill of Rights of this country.

The CHAIRMAN. Please be responsive to the question.

Mr. LAWSON. It is also a matter—
(The chairman pounding gavel.)

Mr. LAWSON. I wish to frame my own answers to your questions, Mr. Chairman, and I intend to do so.
. . . .
Mr. LAWSON. It is absolutely beyond the power of this committee to inquire into my association in any organization.

Mr. LAWSON. I am glad you have made it perfectly clear that you are going to threaten and intimidate the witnesses, Mr. Chairman.
(The chairman pounding gavel.)

Mr. LAWSON. I am an American and I am not at all easy to intimidate, and don’t think I am.
(The chairman pounding gavel.)
. . . .
The CHAIRMAN (pounding gavel). Mr. Lawson, just quiet down again.
Mr. Lawson, the most pertinent question that we can ask is whether or not you have ever been a member of the Communist Party. Now, do you care to answer that question?

Mr. LAWSON. You are using the old technique, which was used in Hitler Germany in order to create a scare here—

Mr. LAWSON. In order to create an entirely false atmosphere in which this hearing is conducted—
(The chairman pounding gavel.)
. . .
The CHAIRMAN (pounding gavel). Excuse the witness—

Mr. LAWSON. As they do from what I have written.

The CHAIRMAN (pounding gavel). Stand away from the stand—

Mr. LAWSON. I have written Americanism for many years, and I shall continue to fight for the Bill of Rights, which you are trying to destroy.
The CHAIRMAN. Officers, take this man away from the stand—
[Applause and boos.]