The Yankees were 6-10 and in last place in the American League East. They had lost three straight games to Chicago and four of their past five games by a total of five runs.

George Steinbrenner was in Culver, Indiana to visit his son in school. He called General Manager Clyde King in the 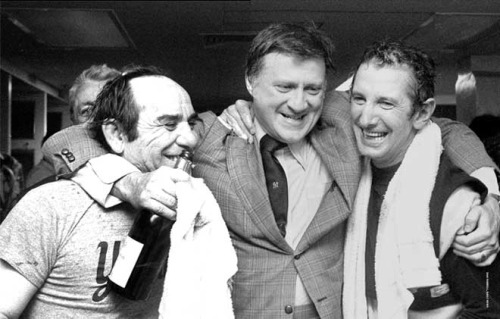 fourth inning of a 4-3 loss to the White Sox and told him to fire Yogi Berra and replace him with Billy Martin. It is the 12th time in 15 years that Steinbrenner had changed managers, and it was his fourth time around with Martin.

Steinbrenner was quoted as saying, “This action has been taken by the Yankees and we feel that it is in the best interests of the club. Yogi’s no different; he has to win like anybody else.”
King delivered the news to Berra in the manager’s office after the game. Copies of a press release quickly passed from player to player. Many players cursed loudly and expressed disbelief. Don Baylor kicked over a large trash barrel.

Berra’s son Dale was an infielder for the Yankees that year. Wearing only a towel and still dripping from a shower, he made his way into his father’s office. He came out crying.

An hour later, Dale stood facing his locker still wiping the tears from his eyes with his dirty socks. “That’s the way the game is today,” Dale said. “Sixteen games. What happens if Billy goes 4 and 12?”

Said Yogi: “I told him (Dale) like I told you. Managers are hired to be fired. I know that’s an old saying, but it’s true.”

When asked what he would do next, Berra said: “Go home and play golf.”