“I tread in the tracks of the fox which has gone before me by some hours, or which perhaps I have started, with such a tiptoe of expectation, as if I were on the trail of the spirit itself which resides in these woods, and expected soon to catch it in its lair.

The snow falls on no two trees alike, but the forms it assumes are as various as those of the twigs and leaves which 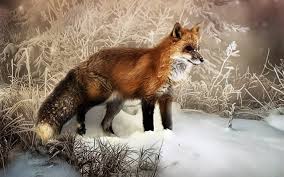 receive it. They are as it were predetermined by the genius of the tree. So one divine spirit descends alike on all, but bears a peculiar fruit in each. The divinity subsides on all men, as the snowflakes settle on the fields, and ledges, and take the form of the various clefts and surfaces in which it lodges.

Here is the distinct trail of a fox stretching quarter of a mile across the pond. Now I am curious to know what has determined its graceful curvatures, its greater or less spaces and distinctness, and how surely they were coincident with the fluctuations of some mind. Why they now lead me two steps to the right, and then three to the left–If these things are not to be called up and accounted for in the Lamb’s Book of Life, I shall set them down for careless accountants. Here was one expression of the divine mind this morning.

The pond was his journal, and last night’s snow made a tabula rasa for him. I know which way a mind wended this morning. –what horizon it faced by the setting of these tracks–whether it moved slowly or rapidly; by the greater or less intervals and distinctness–for the swiftest step leaves yet a lasting trace.”