On the third Monday of August, 1817, the Linnaean Society of New England commenced its formal scientific investigation into the curious sightings in Gloucester Harbor.

A week earlier, on a calm and sunny day, fishermen had seen a strange marine creature break the surface right in the harbor. It moved in 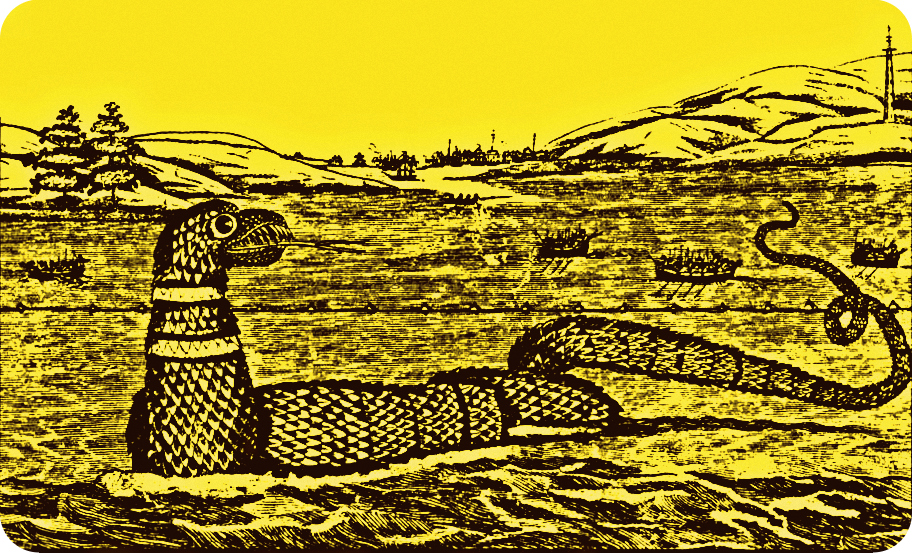 jolting, up-and-down motions, and it was really, really big. Solomon Allen reported, “I should judge him between eighty and ninety feet in length, and about the size of a half barrel, apparently having joints from his head to his tail. His head formed something like the head of a rattle snake, but nearly as large as the head of a horse.”

The Salem Essex Register reported, “The head of it, eight feet out of the water, was as large as the head of a horse, and great in length.” Two muskets had been fired at it, and appeared to hit it on the head, but without effect. “Monstrous Serpent,” ran the headline in the Boston Weekly Messenger. “I have been to sea many years,” Master Toppan of the schooner Laura reported “and never saw any fish that had the least resemblance to this animal.” Shipmaster Eppes Ellory saw it through his spy-glass: “When I saw him open his mouth and his mouth appeared like that of a serpent; the top of his head appeared flat.” Lonson Nash saw him for nearly half an hour. “I should judge he was two hundred and fifty yards from me, when the nearest … I saw, at no time, more than eight distinct portions … I believe the animal to be straight, that the apparent bunches were caused by his vertical motion.”

The Linnaean Society named the serpent: Scoliophis Atlanticus, for its kinked back that floated out of the water, and published its findings: “Report of a Committee of the Linnaean Society of New England Relative to a Large Marine Animal Supposed to be a Serpent, Seen near Cape Ann, Massachusetts, in August 1817″ through the Harvard University Press.

The depositions taken by the society were uniform: The animal only appeared in calm weather and in flat water; its body was thick as a keg and its skin dark chocolate brown, nearly black, and reflected sunlight brightly when it rested on the surface. It had black eyes and a head the size of a big dog or a horse but leathery and snake-like. It swam fast – perhaps 15 miles per hour, but its humps didn’t glide horizontally through the water as dolphins’ do; they sank directly down, submerging and reappearing like a big, marine caterpillar, scooting just under the surface.

Included in the report was a five-page foldout rendering of Scoliophis modeled after a snake-like creature found near the beach, presumed to be the serpent’s offspring.