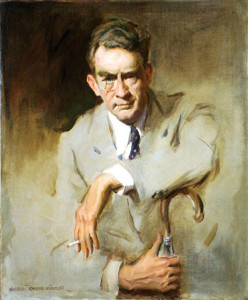 James Montgomery Flagg sold his first illustration to St. Nicholas Magazine when he was twelve years old. By the age of fourteen he was drawing for the humorous Life Magazine, and two years later he was working for Judge.

In 1893 Flagg attended the Art Students League and then studied in London, but he later recalled: “There are no art teachers. Art cannot be taught. Artists are born that way.”

On his return to the States he married Nellie McCormick, a St. Louis socialite eleven years senior who knew all the richest people in all the big cities. “Here was the beautiful woman who had turned down a number of rich suitors to marry a poor but promising artist who was madly in love with her….”

The couple moved to California, then Florida and Virginia. He attempted to become a society portrait painter, but in 1904 he returned to New York City to concentrate on magazine work. His work appeared in all the major publications, including Scribner’s, McClure’s, Collier’s Weekly, Ladies’ Home Journal, Cosmopolitan, Saturday Evening Post and Harper’s Weekly.

In 1903 he began drawing portraits for Photoplay Magazine, and soon found himself involved in dalliances with several Hollywood stars. “Many of those girls were so beautiful; and artists are such fools! If I had this side of life to live over again. I’d again be just such a fool as I was!”

When the United States entered the First World War a group of artists, chaired by Charles Dana Gibson, established the Division of Pictorial Publicity. The group met at Keene’s Chop House in New York to discuss the government’s need for posters. Flagg designed 46 posters, and used his own face as the model for his most iconic work, the Uncle Sam poster with the caption “I Want You”.

James Montgomery Flagg passed away in 1960. Today, he is best remembered for his patriotic self-portrait, but the illustrations he cherished most were his portraits of Hedy LaMarr (“it would be only a blind and deaf man who wouldn’t fall in love with her”), Joan Fontaine (“she has everything”), Greta Garbo (I can think of no woman I would prefer to paint”) and Merle Oberon (“much more beautiful to meet than to see… on the screen”).