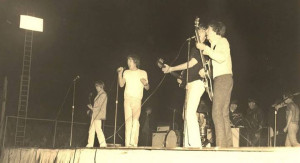 After a morning press conference aboard a yacht in New York City and a visit with Bob Dylan at a recording studio, the Stones headed to Boston to start their tour with a performance at the Manning Bowl in Lynn, Massachusetts. Tickets were $3 to $5 and a local promoter had staged a Battle of the Bands for and opening act. The Mods, a local band that played CYO dances and high school mixers throughout the South Shore won an opening spot before the McCoys (“Hang on Sloopy”) and the Standells (“Muddy Water”) prepped the crowd for the appearance of the Stones.

A warm rain started to fall, but the 8,000 fans were ready for an historic night. Finally Arnie “Woo Woo” Ginsburg introduced the feature act, and with an adrenaline rush Mick, Keith, Bill, Charlie, and Brian hit the stage and launched into “Not Fade Away.” After ten songs, including “Mother’s Little Helper”. “Get Off of My Cloud”, and “19th Nervous Breakdown”, they launched into “I Can’t Get No Satisfaction.”

The rain started to come down hard, and the fans surged towards the flimsy stage and the police got nervous and fired off tear gas. The Stones jumped into limos and were gone. The crowd was left to fight off the tear gas and throw wooden chairs around the field.

”It was a bit of an outdoor crazy,” Mick Jagger said of that Lynn show. ”It wasn’t well secured. A few people got a bit drunk. There were a few cops and that was the end of it.” Added Keith Richards recently: ”Things got a little blurry in the ’60s. Tear gas, yeah, that was the other continuous smell of the ’60s. I can’t say I miss it.”