When Joseph Brant was born in 1742, he was aptly named Thayendanegea, which in Mohawk means “he places two bets.”

He became a warrior at age 15 and first went into battle in the French and Indian War against Fort Niagara and at the siege of Montreal. Sir 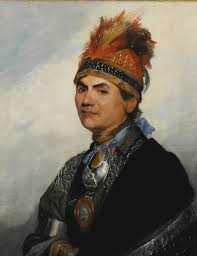 William Johnson, the Indian Agent for New York, was so impressed by the young brave that he sent him to Moor’s Indian Charity School. Young Brant was “of a Sprightly Genius, a manly and genteel Deportment, and of a Modest and benevolent Temper.” He was soon teaching the Mohawk language to missionaries and translating St Mark’s Gospel into Mohawk.  However, a letter from his sister called him home to Canajoharie, since the Indians were displeased with his being at the school, “don’t like the People &c.”

After war broke out at Concord and Lexington, Brant sailed to England to represent the interests of the Iroquois people. He was introduced to the leading men in London, but James Boswell noted “he chiefly admired the ladies and the horses.” He met King George III but refused to kneel, saying “I bow to no man for I am considered a prince among my own people. But I will gladly shake your hand.” He allowed he would be willing to kiss the queen.

He attended a performance of Romeo and Juliet. A Lady asked, “What do you think of that kind of love-making, Captain Brant?” He replied, “No lover worth a lady’s while would waste his time and breath in all that speech-making. If my people were to make love in that way our race would be extinct in two generations.”
He also presented grievances: “It is very hard when we have let the Kings subjects have so much of our lands for so little value, they should want to cheat us of the small spots we have left for our women and children to live on.” Brant was assured “of every support England could render.”

Brant returned to America. Urging his people to abandon neutrality and support the Crown, he raised a force of warriors and started raiding along the Mohawk River. In quick action he attacked Fort Stanwix, Oriskany, Cobleskill, Sharon, and German Flats. Along with British rangers and Seneca warriors he attacked Cherry Valley. Brant was ruthless against combatant soldiers, but when the Senecas started to massacre settlers, he desperately tried to save innocent lives.

Brant finally ran into General George Clinton’s expedition down the Susquehanna whose large force and superior weapons devastated the Indians.  The war ended and the Treaty of Paris ignored the Iroquois and transferred sovereignty over western lands to the Americans, even though the territory was occupied by Indians. Brant was furious; England had “sold the Indians to Congress.”

In 1785 he set sail again to present Indian’s claims for war losses to the Crown. He secured compensation and received an assurance of the king’s concern and a recommendation that the Indians conduct their affairs “with temper and moderation” which would “most likely secure to themselves the possession of those rights and privileges which their ancestors have heretofore enjoyed.”

When he returned to America, George Washington invited Brant to Philadelphia to help negotiate peace in the west. Washington offered him a large land grant and a pension, but he considered the offer a bribe and refused it, although he did agree to appeal to the western confederacy. Brant then retreated to Brantford, Ontario, where King George donated a chapel to his Mohawk tribe in gratitude for their service during the Revolution.

Brant was admired for his intellect, his dignity, and his ready wit. He understood that the old structure of women farmers and men hunters was passing, and he encouraged his people to learn to read and write.  He admired the industry of the whites, but was repelled by the class divisions in white society, the harshness of its laws, and disdained the fact that the courts could be manipulated by the powerful so  that the “estates of widows and orphans” could be “devoured by enterprising sharpers.”

“Cease, then, to call yourselves Christians, lest you publish to the world your hypocrisy. Cease, too, to call other nations savage, when you are tenfold more the children of cruelty than they.”

To the end, he cared for his people. Even at his death they were uppermost in his mind:

“Have pity on the poor Indians. If you have any influence with the great, endeavor to use it for their good.”