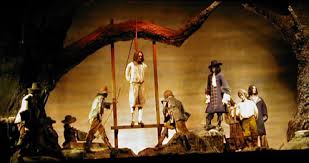 John Proctor was a successful farmer in Salem. He believed the girls accusing his fellow villagers were frauds and liars and he scoffed at the idea of witchcraft. When his own young servant, Mary Warren, began having fits in March of 1692, he beat her in an attempt to get her to behave. Proctor’s wife Elizabeth, pregnant at the time, was accused of witchcraft on April 4th and then Abigail Williams and Mary Walcott accused John Proctor’s spirit of having tormented them and pinched them. Mary Warren confirmed the accusations: I have seen the apparition of John Procter Sr among the witches and he hath often tortured me by pinching me and biting me and choking me and pressing me one my stomach tell the blood came out of my mouth …” Proctor appealed to the ministers in Boston on the use of spectral evidence in a trial, but it was too late. John Proctor and his wife were convicted of witchcraft and sentenced to the gallows, but Elizabeth’s execution was commuted until after the birth of her child

George Jacob’s maidservant, Elizabeth Churchill, as well as Mary Walcott testified that he had tempted them to sign the Devil’s Book, and threatened them with harm if they refused. Jacobs steadfastly maintained his innocence. Justice Hathorne badgered him concerning his knowledge of witchcraft:  “I know not of it, any more than the child that was born tonight.”  During his examination Jacobs was asked to recite “The Lord’s Prayer” as it was generally known that no witch could recite it perfectly.  The nervous old man jumbled his words and omitted an entire sentence.  Knowing his mistake, and fearing the worst, he remarked bravely, “Well, burn me or hang me, I will stand in the truth of Christ.”

On the Reverend George Burroughs’s body, the jury could find no witches’ marks, but the minister was still convicted of witchcraft and conspiracy with the Devil. He was carried in a cart with others through the streets of Salem to Gallows Hill. While standing on a ladder before the crowd he successfully recited the Lord’s Prayer, something that George Jacobs had been unable to do. The accusers said the Devil dictated the words to him and as soon as he was hung Cotton Mather mounted on his horse and declared to the crowd that Burroughs was no ordained minister and that the devil had often been transformed into the Angel of Light.

Martha Allen married Thomas Carrier, a Welsh servant, in Andover in 1674, but not until after giving birth to their first child; the scandal was not forgotten. She was later accused of bringing smallpox to town, and folks found it curious how she had inherited property from her father after he died from the disease. Martha’s children testified against her; young Sarah confessed first and then her brother Thomas confessed, while tied with a rope from his neck to his heels. Martha shouted her innocence from the scaffold, refusing to confess to “a falsehood so filthy” in order to avoid hanging.  “…I am wronged. It is a shameful thing that you should mind these folks that are out of their wits.” Cotton Mather noted in his diary Martha Carrier was a “rampant hag” and possibly the “Queen of Hell.”

John Willard was constable in Salem at the time of the first
allegations.  It was his duty to bring the accused before the court, but he began to doubt the truth of the accusations. In May 1692 he refused to make any more arrests, and then he himself was accused of witchcraft and of murdering thirteen citizens. His wife’s grandfather, Bray Wilkins, who may have been suffering from kidney stones, claimed that after a mean look from Willard he became immediately sick. About the “afflicted girls,” Willard is said to have spoken out against the proceedings with the words, “Hang them. They are all witches.”

The Executions went on; when the Reverend Burroughs was cut down, he was dragged by a halter to a hole between the rocks, about two feet deep; his shirt and breeches being pulled off, and an old pair of trousers of one executed put on his lower parts: he was so put in, together with John Willard and Martha Carrier, that one of his hands, and his chin, and a foot of one of them, was left uncovered.