June 26, 1948: Shirley Jackson publishes “The Lottery” in the New Yorker 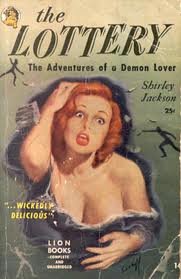 “Dad and I did not care at all for your story in The New Yorker . . . Why don’t you write something to cheer people up?”

The short story opens in a bucolic New England village, a setting not at all unlike the author’s native North Bennington, VT:

“The morning of June 27th was clear and sunny, with the fresh warmth of a full-summer day; the flowers were blossoming profusely and the grass was richly green. The people of the village began to gather in the square, between the post office and the bank, around ten o’clock …”

The locals are in an excited yet nervous mood that late June morning. Children gatherstones as the adult townsfolk assemble for their traditional event, practiced to ensure a good harvest (“Lottery in June, corn be heavy soon”).

The preparations started the night before with Mr. Summers and Mr. Graves making the paper slips and the list of all the families. Once the slips were finished, they were put into a black box, and stored overnight in a safe at the coal company. The next morning the townspeople assemble before 10 a.m. in order to have everything done in time for lunch.

First, the heads of each household draw slips until every household has a slip; Bill Hutchinson gets the one slip with a black spot, meaning that his family has been chosen. The second round is for the family members to draw. For the first round, the men have to be over sixteen years of age, however in the second round everyone is eligible, no matter their age. Bill’s wife Tessie gets the marked slip; after the drawing is over and Tessie is picked, the slips are allowed to fly off into the wind.

The story concludes with its unsettling denouement, as Tessie Hutchinson holds her hands out desperately as the villagers move in on her:

“It isn’t fair,” she said. A stone hit her on the side of the head. Old Man Warner was saying, “Come on, come on, everyone.” Steve Adams was in the front of the crowd of villagers, with Mrs. Graves beside him.

“It isn’t fair, it isn’t right,” Mrs. Hutchinson screamed, and then they were upon her.