October 7, 1849: Thoreau visits the Shipwreck of the St. John

The brig St. John sailed from Galway with great hope for its cargo of emigrants looking to find new life in America. The voyage was easy and as the ship passed Cape Cod Light Captain Martin Oliver issued grog to his crew and suggested the passengers might celebrate. They had reason to be merry; they had left behind a country of starvation, disease and death, and the voyage had been less of a trial than expected. They decorated the rigging with candles and “passed the night in song and dance.” 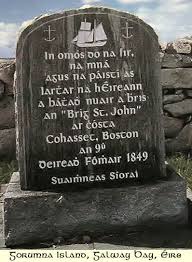 Late that night, as the ship passed Scituate Light, the wind started to blow hard out of the northeast. The ship dropped anchor two miles off the coast, but in the gale the anchors failed to hold. Blown inside Minot’s Lighthouse, the Captain tried “to wear away” up to another brig lying at anchor inside the breakers at Hocksett Rock, but by then the sails were in shreds. The screaming winds pushed the ship onto a submerged ledge.

Unable to maneuver, the brig took a horrendous pounding from the surf, the hull filled and terror-stricken emigrants began to be washed overboard. The crew slashed away masts and sails to try to lighten the ship, but the St. John was firmly stuck. Within an hour the hull shattered; planks and decking and barrels of cargo, as well as the bodies of her Irish passengers, began washing ashore on the beaches of Cohasset.

Two days later Henry Thoreau left Concord with his friend Ellery Channing for a visit to Cape Cod. Having been “accustomed to…excursions to the Ponds within Concord”, Thoreau looked forward to a tour of the coast. In Boston, the companions saw handbills saying “Death! 145 lives lost at Cohasset!” The prospect of seeing a shipwreck promised a novel experience; Thoreau and Channing decided to travel by way of Cohasset.

When they arrived, Thoreau found the sea “still breaking violently on the rocks.”  He recorded the scene in his journal:
In the first cove were strewn what seemed the fragments of a vessel, in small pieces mixed with sand and sea-weed, and great quantities of feathers; but it looked so old and rusty, that I at first took it to be some old wreck which had lain there many years…  I asked a sailor if that was the St. John. He said it was. I asked him where she struck. He pointed to a rock in front of us, a mile from the shore, called the Grampus Rock, and added:

“You can see a part of her now sticking up; it looks like a small boat.”
I saw it. It was thought to be held by the chain-cables and the anchors. I asked if the bodies which I saw were all that were drowned.

“Where are the rest?”

“Most of them right underneath that piece you see.”

It appeared to us that there was enough rubbish to make the wreck of a large vessel in this cove alone, and that it would take many days to cart it off. It was several feet deep, and here and there was a bonnet or a jacket on it. In the very midst of the crowd about this wreck, there were men with carts busily collecting the sea-weed which the storm had cast up, and conveying it beyond the reach of the tide, though they were often obliged to separate fragments of clothing from it, and they might at any moment have found a human body under it. Drown who might, they did not forget that this weed was a valuable manure…

A little further along the shore we saw a man’s clothes on a rock; further, a woman’s scarf, a gown, a straw bonnet, the brig’s caboose, and one of her masts high and dry, broken into several pieces. In another rocky cove, several rods from the water, and behind rocks twenty feet high, lay a part of one side of the vessel, still hanging together.. . .

A little further on a crowd of men was collected around the mate of the St. John, who was telling his story. He was a slim-looking youth, who spoke of the captain as the master, and seemed a little excited. He was saying that when they jumped into the boat, she filled, and, the vessel lurching, the weight of the water in the boat caused the painter to break, and so they were separated. Whereat one man came away, saying:—

“Well, I don’t see but he tells a straight story enough. You see, the weight of the water in the boat broke the painter. A boat full of water is very heavy,”—and so on, in a loud and impertinently earnest tone, as if he had a bet depending on it, but had no humane interest in the matter.

Another, a large man, stood near by upon a rock, gazing into the sea, and chewing large quids of tobacco, as if that habit were forever confirmed with him.

“Come,” says another to his companion, “let’s be off. We’ve seen the whole of it. It’s no use to stay to the funeral.”